Landmark restoration a generational affair for the Kerrs

Jane Kerr literally grew up in the real estate business as her parents, John and Oreal, started out buying and redeveloping inner city properties in Calgary. 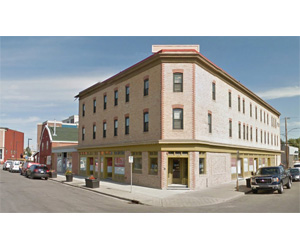 For the early years of her adult life it appeared that she, like her two brothers, was not destined for a career in the real estate game. She became a veterinarian and moved to New York to practise her trade.

After a few years, however, she moved back to Calgary and, while still working in the animal medicine field, felt the inevitable pull of the family business at the same time she was starting her own family.

“Real estate is such an exciting thing and it is very flexible with my family,” she said. “We expanded when my daughter was four months old and we have been expanding since then.”

The family’s two companies, Ansonia Property Management and Ansonia Property,  now have a roughly 50-50 mix of holdings in mixed use commercial-retail and multi-family buildings in the greater Calgary area.

The second-generation Kerr, now 37, became a partner in the business in 2009 and soon set to work on what may be considered the Kerrs’ most ambitious development: the restoration and renovation of the National Hotel heritage landmark that includes a conversion of a stable/barn to office and retail uses.

The century-old landmark, originally constructed to house railway workers and their four-legged rides, had fallen into disrepair and disrepute as it attracted a gritty, thirsty crowd as one of the city’s last remaining watering holes for the city’s underclass.

“It was really sort of a scary place, kind of the worst, scariest bar in town,” she said.

Given its status as a provincial heritage building, the National Hotel could not be torn down, presenting would-be developers with a unique set of challenges. A developer came up with a plan to transform the hotel into townhomes. The proposal involved tearing down the barn and replacing it with a replica that would enhance the property as a live-work site.  In addition, a 10-storey condo tower was proposed for the the property’s parking lot.

The original developer pulled out and the Kerrs came on the scene, which drew second-generation Jane into the complex project. The family’s timing was good: Calgary came out of the recession in good shape and when Ansonia bought the National Hotel in 2010, the Inglewood neighbourhood was going through a rapid process of gentrification.

That didn’t make the project any less challenging, however.

“The building was derelict for a number of years. I liked to call it a pigeon sanctuary, it was in a terrible state of disrepair,” she said. “Resurrecting, redeveloping a heritage project is not for the faint of heart. There are a lot of regulations; we restructured the entire sandstone foundation 12 feet at a time.”

The ambitious redevelopment of the former railway worker hotel attracted the attention of well-known chef Michael Noble, who was one of TV’s original Iron Chefs and became the Kerrs’ lead tenant with a trendy restaurant on the site.

While the Iron Chef gave the project status and recognition, he also presented some challenges. The biggest request: his desire for a second kitchen on the site, prompting them to excavate. “It was a big project but it was a lot of fun,” said Kerr. “(We have) such a great anchor tenant, and we have an engineering firm occupying the top two (floors) of 8,400 square feet of office.”

Even the site’s old livery/barn received its 15 minutes of fame. Producers of the reality show Canadian Pickers leased the barn prior to the redevelopment and over four seasons viewers saw the remake of the site, which today houses retail tenants.

Development of the property’s parking lot for a condo isn’t in the current scope of work for Ansonia.

Jane and her father John, who originally got into the business as a  HVAC professional, acted as co-project managers on the National Hotel makeover.

It was a good partnership.

“I handle all the financing, the bills and all that but Dad and I also co-contracted it,” she explained. “He is an amazing technical genius, so we ran trades meeting every week and we are very hands-on with that. It makes it all the more profitable.”

John Kerr’s HVAC background is well-represented in the National Hotel.  The 107-year-old building now has a sophisticated system that allows the owners to monitor temperatures in 40 different zones from a smartphone.

The Kerrs have been busy in Inglewood, having taken up the renovation of other Calgary landmarks such as the Garry Theatre, Burn Block and Fraser Block.

For Jane, the commercial side of the business has been her focus for the past five years and likely will remain so. “I’m just starting to get involved in our multi-family side but definitely our passion and the fun stuff is on the commercial side for me.”

Next generation getting ready

Having grown up with real estate “at the kitchen table” it was only natural Jane would join the family business at some point. With her parents now in their 70s, it is unlikely she can or will step away from the real estate holdings any time soon.

And there is likely another generation on the way.

“My five-year-old is a keen real estate girl as well, it is quite cute,” she said. “My son, he hasn’t articulate quite the interest she has but you never know.”