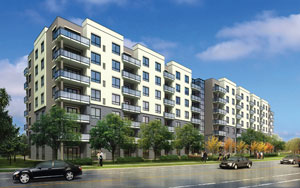 The company’s Southport project in Halifax reportedly sold out its 70 condo units in a single weekend. Killam actually isn’t building the lofts; those are the work of Toronto-based Urban Capital, which has entered Nova Scotia’s market for the first time.

But the partnership in the six-storey Barrington Street building in Halifax’s downtown also includes 72 rental units Killam owns and the swift sale of the lofts can only reflect well on the rentals as well.

In St. John’s, N.L., Killam is nearing completion on the two-building, 102-unit Chelsea Place, which is a sister development to its other rental building finished in 2013, Bennett House. Both are in the Quidi Vidi area of the city, within walking distance to downtown and what Noseworthy calls a “very desirable area.”

St. John’s is a market that hasn’t seen much new rental development in a number of years, says Noseworthy. And with housing prices in the city having increased significantly in the last few years and a lot of older product on the market, new rentals are in demand.

The company is also erecting a seven-storey, 122-unit rental project in Cambridge, Ont. Saginaw Gardens at 650 Saginaw Parkway sits on one of Cambridge’s highest points and the eastern location offers sweeping views of the municipality (shown in the image).

The Saginaw Gardens site is zoned for two buildings. Once the development is completed in the spring of 2015, work will begin on a second, 80-unit building.

“We like its proximity to the GTA. There was an opportunity last year to buy some land there and having been focused on developments for a while now and wanting to expand that development opportunity into Ontario, it was a great opportunity for us,” Noseworthy explains.

That’s not the only great opportunity for Killam. The firm’s most recent acquisition is a recently completed, 152-unit apartment building in Ottawa paired the company with new partners, KingSett Capital and the Alberta Investment Management Corporation (AIMCo).

The purchase price for  Kanata Lakes Apartment II is $48.7 million. Killiam’s 50 per cent ownership in the building amounts to $24.4 million for the company. The building is the second on the site which is anticipated to be a five-building complex.

The new partners come at a time when former Killam investment partner, Kuwait Finance House advised Killam it plans no further investments in Canada and intends to divest itself of its Canadian rental holdings, including a 75 per cent stake in Kanata Lakes Apartment I with Killam.

KingSett is a private equity real estate investment business that co-invests with pension funds and high net-worth individual clients. The firm has more than $5 billion worth of assets under management. AIMCo manages an investment portfolio of approximately $80 billion. The company was established in 2008 and invests for 27 pension, endowment and government clients in Alberta, including the Alberta Heritage Savings Trust Fund.

Does that mean an expansion into Alberta for Killiam? “We’ll see,” says Noseworthy. “Certainly they (the Alberta Investment Management Corporation) have the presence there and the West is an area we’d love to own in. The potential might be there.”

At this point, Killam has completed five buildings and developing has been a learning experience for the company. “We’re definitely more experienced developers than we were three years ago before we started, having completed four projects last year in the same timeframe,” Noseworthy observes.

Since then the company has learned to reduce the risk associated with development, securing a higher percentage of the costs ahead of time to reduce volatility, Noseworthy says. “Part of it is just trying to manage the extras, like a house reno,” she said “looking at where we can save more and where it makes sense to spend a little more.”

Overall, though, Killam sees development returns as being healthier than acquisitions at the moment and it allows the company to develop product that tenants are searching for, but not finding.

“When we look at buying high-quality assets, there’s not a lot for sale in many markets, when we’re looking at newer construction and the type of quality we’re looking for,” Noseworthy says.