Construction has been underway for months, but the official groundbreaking ceremony for the first class-A office tower to be built in the Vaughan Metropolitan Centre (VMC) was staged on Tuesday. 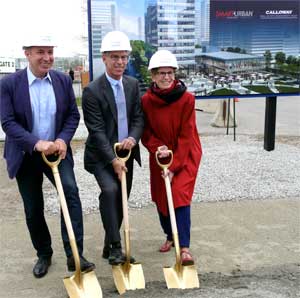 KPMG Tower, located on the southwest corner of Millway Avenue and Applemill Road 25 kilometres north of downtown Toronto, is slated to open in the fall of 2016. It will be comprised of 32,850 square metres (365,000 square feet) of development, with a 15-storey tower connected to a two-storey retail podium.

Professional services company KPMG, as lead tenant, will occupy five floors and 11,250 square metres (125,000 square feet) of office space and employ about 500 people in the structure that’s being built to LEED Gold standards.

Two levels of below-grade parking will provide 462 spaces and an interim surface parking lot will include another 322 spaces. That surface lot will eventually be replaced by green space as part of a civic square and central park that will front the tower and run through the property. Those parking spaces will be moved to a permanent structure nearby.

“This groundbreaking ceremony for the KPMG Tower signals a real vote of confidence in Vaughan’s downtown from a major employer,” said Ontario Premier Kathleen Wynne, who mingled with the more than 100 guests before picking up a shovel for a photo opportunity with Vaughan mayor Maurizio Bevilacqua and SmartCentres president and chief executive officer Mitchell Goldhar.

Calling the area ‘a downtown’ is a bit of a stretch at this point, as it’s still primarily comprised of low-rise shopping centres, parking spaces and busy roads. But building VMC, Canada’s biggest urban development project, intends to change all that. Bevilacqua called it a “historical event” that “generations upon generations of people here in York Region and the City of Vaughan will be talking about for many years to come.”

The 160-hectare (400-acre) site is located at the intersection of Highways 400 and 407 and bisected by Highway 7. SmartCentres and partners including Calloway REIT own and manage the development of 40 hectares (100 acres) of land within VMC that’s bounded by Highway 7 to the south, Jane Street to the east, Portage Parkway to the north and Highway 400 to the west.

The SmartCentres lands form the largest single-owner-controlled parcel within VMC.

It will be the future home of the terminus subway station as part of the Toronto Transit Commission’s $2.6-billion, 8.6-kilometre, six-station extension of the University-Spadina line north from Downsview as well as the new York Region Rapid Transit bus terminal, which will be operational in 2017. Both will be connected to KPMG Tower by an underground pedestrian tunnel.

“When I first bought this land in 1996, I was focused primarily on shopping centre development — more so value-oriented shopping centres designed for the majority of Canadians,” said Goldhar, the billionaire owner of privately held SmartCentres. “This property, in my mind, was originally intended to be a single-storey retail facility with surface parking.

“Vaughan’s vision . . . was quite different”

“The City of Vaughan’s vision at the time was quite different. They envisioned a corporate centre with complementary uses. Our difference of vision evaporated when the TTC called and said it wanted to expand the subway to this area and, specifically, to this property. With Highway 400, Highway 407 and Highway 7 all in one place, and now with the subway and ultimately with the regional rapid bus service, great city planning was in place with ample infrastructure.”

The Region of York has started work on the Highway 7 Rapidway, a 15.9-kilometre dedicated bus rapid transit route that will run from Markham in the east to beyond Pine Valley Drive in Vaughan in the west once it’s completed in 2018. The first phase, running from Yonge Street in Toronto to Edgeley Boulevard in Vaughan, is scheduled to open at the same time as the subway station in late 2016.

The Region of York and City of Vaughan are forecasted to be among the fastest growing communities in the Greater Toronto Area over the next 25 years, particularly with respect to major office employment, so creating proper infrastructure now is vital. VMC will play a key role, comprising a mix of land uses that include office, institutional, retail, residential, entertainment and multi-modal transit as well as open spaces and civic squares.

Diamond Schmitt Architects was brought on board in 2010 to create a plan for the SmartCentres lands, and the initial focus was on creating a 3.2-hectare (eight-acre) central park that will form an axis bounded by a mix of office, residential and retail developments. The park has been planned by landscape architect Claude Cormier. A civic square will also be created between the subway station and the Diamond Schmitt-designed bus terminal.

“We laid out a large central park to connect and affect all of the future development at the VMC,” said Goldhar, the founder of Canada’s largest developer and operator of unenclosed shopping centres that has grown to include more than 250 properties. “This may or may not seem odd to you, but it’s generally not what developers do first.

“Developers generally don’t have the privilege of being involved in such a comprehensive master-planning process and to be involved in developing a city centre from scratch. I assure you that this developer is fully committed to this responsibility along with the city, the region and the province to create a city centre we will all proudly identify with for many years to come.

“We are all here today to acknowledge together the significance of this place in city-planning terms, in economic terms, in public-private collaboration and cooperation terms. Today’s celebration could not happen without all of the partners working together. Land owners, the city, the region, the federal and provincial levels of government have been incredible, inspired and cooperative with each other.”

Goldhar is a trustee and part owner of Calloway REIT, a retail real estate owner and operator with $7 billion in assets and approximately 2.52 million square metres (28 million square feet) of leasable space in more than 130 locations across Canada. Calloway has been purchasing SmartCentres-Walmart shopping centres for more than a decade, and the REIT is based in SmartCentres’ Vaughan headquarters.