It is fair to say Arni Thorsteinson has seen it all in his 45 years in the Canadian real estate business, and his view of the current state of the industry reflects that of someone who has lived through many cycles and directs a three-company real estate empire. 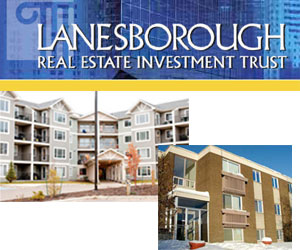 “The cycle always comes back, you just have to have the liquidity and the staying power to weather the cycles and we always have,” said the Winnipeg-based CEO of Lanesborough REIT (LRT.UN-T) and Temple Hotels Inc., (TPH-T) who also serves as president of family-owned Shelter Canadian Properties Limited.

Thorsteinson’s Lanesborough REIT finds itself at ground zero with regards to the recent plunge in energy prices. The majority of the holdings of the trust are in Fort McMurray, the epicentre of oil sands production. In all, 13 of its 17 multi-family residential projects (more than 1,000 units) are in Fort Mac.

“We’ve been through these cycles before in 2009 and 2010; it is weathering the storm and oil is back up over $50 now,” he said, adding it is just the latest in five or six cycles in the last three decades.

Lanesborough is not bailing on the northern Alberta city of 125,000 people because it knows oil prices will eventually rise and the energy multinationals that have sunk 10s of billions of dollars into oil sands mega projects are not leaving, either. Fracking may come and go, but the sunk costs of Alberta’s oil patch means those energy companies aren’t going anywhere.

Vacancies in Fort Mac are rising “because there is less construction,” said the REIT’s CEO. “On the other hand, we are noticing the new people there aren’t buying houses, employment is still growing by 2,000 people a year because production is increasing. They don’t want to buy houses so there is some apartment demand.”

Despite the inevitability of a Fort Mac turnaround, Lanesborough finds itself in sell mode. This week, it sold a 33,936-square-foot light industrial property located in Airdrie, Alta., for $4 million and plans are to divest of more assets.

“We still would like to reduce our debt so we have a couple of properties, a couple of our seniors’ homes, that are slated for divestiture this year,” said Thorsteinson. “We are looking at some other assets as well because apartment properties in good markets like Manitoba are at all-time high prices. They are trading at 4, 4.25 cap rates.”

Lanesborought’s seniors’ residences now on the block include a property in Port Elgin, Ont., and a second in Moose Jaw, Sask.

He anticipates little buying in the near future. “We have to reduce our debt and wait for Fort McMurray to recover.”

On the bright side

Given the diversified real estate holdings Thorsteinson directs, there are plenty of bright spots beyond the oil patch-dependent REIT. The low interest rate, low energy price and low dollar environment should benefit his other holdings.

“We see strong markets outside of Alberta. Manitoba,where we have a big chunk of our portfolio, is predicting possibly three per cent growth both this year and next year, mainly driven by exports and agriculture.”

Alberta has boomed in the years since the financial crisis and now, apparently, is paying some of that back, while much of the rest of the country stands to benefit.

“We are getting very good results in B.C., Manitoba and Ontario. We have three big hotels in Nova Scotia . . . Americans are booking like crazy with our 80-cent dollar. Canadians will be staying in Canada and driving across the country, they won’t be going to the States with an 80-cent dollar.

“So we are predicting the best year in our hotel business since 2002.”

In all, Thorsteinson controls 37 hotels through Shelter and publicly traded Temple Hotels (in which he holds a 10 per cent stake).

Thorsteinson, 66, got his start in the industry as a real estate investment analyst with Richardson Securities after graduating from business school. “Ira Gluskin and I were the first real estate analysts in Canada in 1969,” he said.

A founder of the Lanesborough, Huntingdon, Temple and White Rock REITs, he is also lead director of Onex Corporation and Bird Construction Co.

Winnipeg-based Shelter Canadian Properties was established in 1990 and is the successor to various Canadian real estate companies which date back as far as 1947. The 300-person company manages a $3.1-billion portfolio of approximately 125 multi-unit rental, condo, commercial and hotel properties, comprised of more than 10,000 suites and in excess of 2.7 million square feet of commercial space – a portfolio valued in excess of $3.1 billion under administration.