Vancouver and Toronto, which have the hottest housing markets in Canada, are also where lenders will be most eager to extend loans for commercial real estate in 2016. 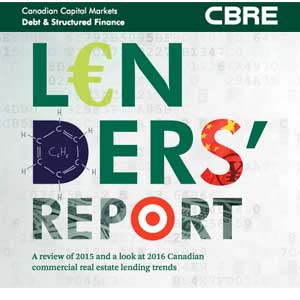 “Toronto and Vancouver seem to be the engines,” Carmin Di Fiore, executive vice-president of CBRE’s debt and structured finance group, said about some of the key findings in CBRE’s 2015 Lenders’ Report.

CBRE’s survey found 73 per cent of lenders are looking to increase their allocation to Canadian commercial real estate next year, with 80 per cent expressing a strong desire to do so in Vancouver and 77 per cent in Toronto.

Forty-six per cent strongly favoured Ottawa-Gatineau due to its infrastructure investment and a belief the new Liberal government may have greater office space requirements than the previous Conservative regime.

“Montreal continues to do what it does, but it seems to suffer from the perceived notion that there’s always a doubt of something rearing its ugly head in that province, so investors and lenders look at it and say it’s a decent market, but there’s a bit of a wild card there,” Di Fiore said of Quebec’s largest city, where 37 per cent of survey respondents had a strong desire to lend.

Fewer than 20 per cent of lenders had a strong appetite to do so in Victoria, southwestern Ontario and Halifax, while that number dropped to 10 per cent or lower in Calgary, Saskatoon, Winnipeg, Hamilton, Waterloo Region, Edmonton, London and Quebec City.

“There are some dark clouds over Alberta,” said Di Fiore. “Edmonton seems to have a hockey arena problem and Calgary seems to have an energy problem.”

Sixty per cent of lenders look to increase their budgets for apartments in 2016.

“Multi-family seemingly always operates in a very tight one to five per cent vacancy rate,” said Di Fiore. “From a lender’s perspective, the stability of those cash flows and the ability to service the debt is key.”

Forty-seven per cent of lenders were interested in extending more money to retail properties, as many remain confident in the sector despite a challenging 2015 due to solid financial backing from real estate investment trusts and pension fund landlords.

DiFiore is wary of too many fashion retailers chasing the same customers and said the closure of Target stores across Canada early this year still hasn’t been resolved in a lot of cities.

“B.C. seems to have taken up a lot of that space, but Ontario is still struggling with it. I think we’ll have some challenges in certain markets where those big boxes are going to be repositioned or chopped up.”

Forty-three per cent of lenders had a favourable view of industrial properties, as an improving American economy and a weak Canadian dollar are expected to boost exports and industrial property fundamentals. Logistic spaces are more popular than traditional manufacturing locations.

“The trends that we’re seeing are a reflection of what’s going on economically in the transformation of Canada to being more of a service provider than manufacturing commodities,” said Di Fiore.

Increased underwriting for seniors housing was forecast by 40 per cent of lenders, while 30 per cent were looking to budget more for central business district office space and high-rise condominiums.

Suburban office space, single-family dwellings and self-storage facilities are targeted for an increased lending budget by 23 per cent of lenders, with hotels and land seen as growth areas by 13 per cent.

Suburban class B office space was listed as a concern for 17 per cent of lenders, the highest rate of any asset class, followed by high-rise condos at 13 per cent and downtown class B office at 11.

Despite slower economic growth in Canada and abroad, 77 per cent of lenders aren’t focused on macroeconomic factors. Canadian commercial property has a solid track record and a majority of lenders are more interested in property quality, the spread that can be earned on loans and the amount of existing leverage a borrower is carrying when deciding upon loan eligibility.

Di Fiore said Canadian lenders are looking to more foreign banks accommodating the increasing demand for debt financing for commercial real estate deals, and he’s interested in seeing if that will materialize since “it’s a relatively small market and a very competitive space.”

All financial institutions operating in Canada under the Bank Act and those unregulated sources known to the industry that have financed Canadian-based commercial real estate transactions were invited to participate in the study on an anonymous basis.