Leopold’s plan to 'shake up’ Montreal CRE at Immodev 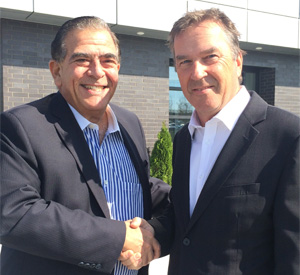 He has been named chairman of Immodev by its president and CEO Marc Vadeboncoeur. Immodev (a combination of the words Immobilier or real estate and Development) currently has 15 commercial brokers, but plans to achieve “multiples of that” in the years to come, Leopold says. The company is also involved in commercial development and has about 25 employees in all.

Immodev will offer commercial brokers a compensation model similar to the one pioneered by RE/MAX co-founder Dave Liniger, which has become the standard in residential real estate.

“Montreal brokers are not taking home as much as they used to; they’re being squeezed on all sides,” Leopold says. Immodev brokers “will put more money in their pockets.”

The company will cut costs by using technology and by setting up virtual satellite offices for its commercial brokers – from traditional offices to home offices. “To have an office downtown and to try to serve Boucherville makes no sense.”

Leopold says commercial brokerages in Montreal tend to not have more than two offices, meaning “their ears are not on the ground.” While brokers who are downtown have statistics about availability in suburban markets, they can’t give clients insider information such as who’s planning to move in the next six months or who intends to downsize.

“If you’re going to serve Mascouche, Candiac or Boucherville, you should be there. The closer you are to your market, the better informed you are and the better you’re able to serve your clientele.”

In addition, the traffic and infrastructure situations in the city make it difficult for brokers downtown to meet off-island clients, where most expansion in the Montreal area is taking place, he says.

Leopold says there are now more people in the Greater Montreal area who live off-island than on-island (approximately 1.8 million versus 1.7 million).

Immodev will also offer its brokers weekly webinars, Leopold says. This, he says, is in sharp contrast to commercial brokers employed by residential brokerages who receive no support from their firms.

In a news release, Vadeboncoeur said Immodev will have virtual and physical offices in every market in Greater Montreal, such as the Plateau Mont-Royal, Old Montreal, Vaudreuil, Boucherville, West Island and Laval.

“There is much to know about in local markets and it is essential to have a full-time presence in these sub-markets,” Vadeboncoeur said, adding the leadership, coaching and training provided by Leopold will make Immodev brokers market leaders.

Leopold hopes to repeat the kind of success he had 30 years when he pioneered tenant representation in Montreal. At the time, “landlords ran everything. The tenant knew nothing and the broker was working for the landlord. I came along and said ‘They’re not getting a good deal. Who’s representing the tenant?’”

His firm went on to become a market leader after taking on what was then the commercial real estate powerhouse – Royal LePage.

Soon after moving to New York in the 1990s, Leopold was in the midst of developing a massive food court in the World Trade Center after noticing its food offerings were sparse with only seven food counters when it should have had 180. (The food court concept was launched in Montreal with the 2020 University office tower in the 1970s, he notes. “It was a very Canadian phenomenon.”)

He sold his interest in the project six months before the planes hit the towers in 2001.

Leopold returned to Montreal in 2010 and became chairman of Avison Young’s Quebec operations before venturing out on his own.

Leopold notes that Toronto, Vancouver, Calgary and even Edmonton are surpassing Montreal in terms of absorption of commercial space. As a result, “for the Jones Lang LaSalles, CBREs and Colliers of the world, Montreal is just another thumbtack on the wall. But they have to be here” primarily to serve their international clients.

To the larger commercial brokerages, Montreal has “gone under the radar” meaning an opportunity has arisen to do something new.

“You have to do something totally different to compete” against the big players. “Instead of playing by their rules, we’re going to play with our rules. Eventually we will attract the world.”

The objective, Leopold says, is nothing less than to become the Bigfoot in Quebec when it comes to commercial real estate.