“Location, location and location” is an enduring cliché in the real estate industry because it’s true. 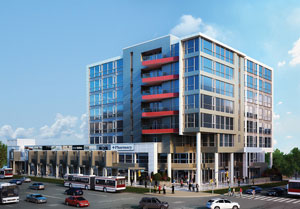 The backers of Downsview’s planned University Heights Professional and Medical Centre hope that real estate mantra will pay off with quick occupancy for its eight-storey building, which is anticipated to be ready for owners and tenants in June 2016.

It shares its auspicious date with the proposed unwrapping of the Toronto Transit Commission’s new Finch West Station subway, currently a series of large excavations at the southeast corner of York University’s main campus. An LRT station is also scheduled to be built by 2020, creating a busy transit hub.

“This new super-hospital, the largest in Canada, is going to be attracting a lot of medical professionals from all over the place because of some of the technology that they have there exclusively,” said Paolo Abate, president of the new development and co-owner of the project.

Officially, Humber River describes itself as “one of Canada’s largest regional acute care hospitals” serving a catchment area of more than 850,000 people in the northwest GTA with three sites, 3,000 staff, 549 beds, approximately 700 physicians and 400 volunteers. The facility is also going to be a training site for University of Toronto and Queen’s University medical students.

A medical turn for the better

Abate’s development team had not intended to erect a medical building on the one-acre site of a Tim Hortons and Shell gas station that was purchased in 2011.

“Originally the thought was to do your typical plaza that you see in and around that area.”

Fortunately for the developer, as it turned out, it took time to negotiate and close the sale and to remediate the property given its gas station roots.

By that time, the current opportunity took shape. “After meeting with the city and speaking with their planners, we realized that there was a bigger initiative that could work here,” he said.

“One, we would be satisfying the city’s desire to have employment land developed but it was really the infrastructure investment that was being made. Not just the subway, but also that LRT. Outside of Union Station, there is really no other transit hub that exists in Toronto. This will be one of the first that integrates both forms of transit.”

Deciding to target medical users for the new building also came out of early discussions with administrative staff of Humber River Hospital.

Abate does not see much difficulty in filling his planned building once it becomes well-known. “The difficulty is strictly in getting the word out there. These are more specialized development projects; it is not that you can put an ad in the (Toronto) Star for a really sexy residential condo and have a lineup of investors.”

The developers of the 165,000-square-foot building are selling the medical offices as condos, supplemented by lease agreements.

“Some of the more sophisticated investors who understand the space have jumped on the opportunity and purchased units because office condos are pretty rare in Canada,” said Abate.

University Heights will contain 89 customizable, divisible and expandable office units of between 550 sq. ft. to more than 2,500 sq. ft. The building is being built to Toronto Green Standard Tier 2 qualifications, equivalent to about LEED Silver standards with the inclusion of high-reflecting materials, energy efficient controls, and low impact mechanical fixtures and a 7,100-sq.-ft. green roof.

The new building will contain retail space on its first two floors, “an open and sun-lit commercial concourse dedicated to restaurant and retail tenants,” with professional and medical offices on the upper levels.

University Heights is currently in development with an expected opening in the summer of 2016.

University Heights is being developed by Real Wealth Group, of which Abate is also CEO. He expects his company will be the eighth-floor tenant of the new building and will retain ownership of the retail space and underground parking asset. “We are certainly not walking away.”

Real Wealth Group is also currently in early-stage development in Aurora, Ont., of a multi-building commercial project that will include a medical office building, he said.

“That Aurora development will probably end up with a total of six to eight different structures on that property, it is a large 25-acre piece.” The website refers to the development as “Aurora Mills Town Centre.”

As well, the developer has acquired chunks of land on Sheppard across from Bayview Village to build an 80,000-sq.-ft., eight-storey condo building that will comprise about 75 condos and retail at grade.