London, NYC among top cities for RE investment

At least $1 trillion will be spent in search of real estate investment opportunities in cities around the world by 2020, and JLL director of global research programs Rosemary Feenan is seeking out the best of them. 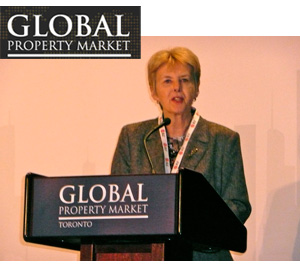 “The old city hierarchy and old way of thinking about what a world city is has broken down and is simply no longer applicable to today’s trends, today’s demography and today’s technology,” she told attendees of the opening session at the Global Property Market at the Metro Toronto Convention Centre on Tuesday morning.

“It’s not about hierarchy anymore. It’s about systems where city upon city are more likely to be like cities in different countries than they are necessarily related to their own national system of cities.”

Fifty per cent of all real estate investment is focused on 30 cities, while London, New York City, Tokyo and Paris account for 19 per cent — down from 23 per cent at their height in 2009.

Twenty cities have consistently ranked in the top 30 for real estate investment for years. However, the last 10 places have been moving around and some 40 cities are vying for them.

There are 200 city competitiveness indices that measure such things as environment, economy, culture, congestion, momentum, politics, pollution, innovation and intangibles to see their effect on the real estate market, according to Feenan.

Research shows there are clusters and systems of cities that can be broken down into four groups: the big six; challengers; emerging world cities; and new world cities. Not surprisingly, London, New York City, Tokyo and Paris are on top — and were recently joined by Hong Kong and Singapore.

“These cities, which have a lot of investment in them, understand that you can’t sit on your laurels,” said Feenan. “Each of these cities is competing in its own way with huge amounts of signature projects.”

Toronto and Sydney on the rise

Toronto and Sydney are projected to join the big six by 2020, and Shanghai and Seoul may join soon after to create a big 10. Los Angeles and Chicago could also potentially increase the group to a dozen, though according to studies Feenan said they’re currently “suffering from too many issues of congestion, sprawl and inequality.”

“Lagos and Nairobi are at the bottom end of this evolution curve but, from now on, we always have to include African cities on the list — not because you’re going to go and invest there next week, but because those African cities are now growing faster than the GDP of Chinese cities when they were in a fantastic growth phase,” said Feenan.

She also looks to Riyadh, the capital city of Saudi Arabia, as a candidate for major investment growth.

“Its King Abdullah Financial District will have 1.6 million square metres of real estate that will look fantastic and be even better when it has a few more tenants. But there’s a will and a commitment and a vision, and you cannot fault cities for having that vision.”

Many new world cities, including Montreal, are also growing in importance due to high-tech innovation, economic specialties, high incomes, efficient infrastructure and quality of life.

Thirty-five of them, with Miami and Austin among the top performers, have grown exponentially in their investment volumes and now account for about 20 per cent of global investment.

The JLL investment intensity index takes a city’s GDP and divides it by investment volume to indicate overall performance and not just the economic base of a city.

While London ranked first, much of the top 20 in the index is taken up by new world cities including Munich, Honolulu, Sydney, Oslo, Copenhagen and Dublin. Feenan said she’s also carefully monitoring Seattle, San Francisco, Berlin, Zurich and Vancouver.

Feenan concluded by saying Canadian outbound real estate investment (excluding multi-family residential properties) since 2006 has totalled $71 billion. About half of that has gone to 10 cities and about 20 per cent of it has been invested in London, New York City and Boston, the latter of which was praised as a knowledge city successfully melding academia with commerce.