Look for another good year in 2015: CBRE

Real estate players will understandably be on interest rate watch in 2015, but CBRE Ltd. predicts the big issues for the industry will continue to be the current office and industrial construction cycle, big cities struggling to cope with rapid population growth and the efforts of retailers to adjust to e-commerce growth. 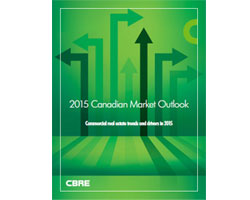 Those are the major themes that come out of CBRE’s 2015 Canadian Market Outlook released last week.

Director of research Ross Moore said CBRE is not expecting rising interest rates to play much of a role in the upcoming year with rate increases in the U.S. forecast to be modest. That should allow the made-in-Canada real estate story to play out much like it did this year.

“It is pretty well going to be the same, if you look at things like GDP, if you look at the unemployment rate ,” he said while walking back to from last week’s Real Estate Forum and interrupting his answer to relay a Brian Mulroney sighting.

“The outlook is more or less the same. Long-term interest rates are even lower,” said Moore, who noted he was one of the few commentators in 2013 to predict they would fall this year. Meanwhile, commentators are split 50-50 on whether short-term rates rates will rise next year.

Little or no change in rates means “we have basically 12 to 15 months of runway where both short-term and long-term rates are going to stay low,” he said. “And when they do go up, they are not going to go up very much. I think the real estate world is more than prepared for higher interest rates. I think people are going to be actually surprised on the upside when it does come how we will do.”

The “spectacular” growth of the U.S. economy has CBRE optimistic about 2015 and that bodes well for the surprising rebound in manufacturing, the research director said.

That has shown up in cities like Montreal, which has seen industrial real estate sector take off following the provincial election. “Montreal has had a great run. It has grown quietly but if you look at the industrial numbers in Montreal, they are amongst the best in the country. Our Montreal guys are more bullish than they have been in a long time.”

In its report, CBRE notes that while distribution activity has dominated the industrial market for several years, the U.S. economic turnaround and low Canadian dollar should boost manufacturing in Ontario and Quebec. With some of the lowest industrial availability rates in North America, it is no surprise Canada is building a record 19.9 million square feet of industrial space “which is expected to be leased as quickly as it is completed,” the firm said.

Much of that new construction is in Calgary, Vancouver, Edmonton and Winnipeg at 45 per cent, well above the 28% of the country’s industrial inventory those cities currently represent.

The firm notes the current office building boom is occurring as businesses are putting heat on developers to give them more because of changing demographics (this year millennials replaced boomers as the largest group in the Canadian workforce) and new workplace strategies.

Millennials want more than the glass boxes their parents worked in and developers are betting the 21.7 million square feet they are adding to existing office inventory will fit the bill. Moore views that as office space that fits the bill “in terms of sustainability and amenities, both in their office building and in the surrounding neighbourhood.”

CBRE points to the rapidly growing tech sector as an area to watch in office. Tech firms have a preference for urban, but it does not have to be right in the core. Instead, they find favour with “formerly overlooked locations” adjacent to the central business districts in cities such as Montreal, Toronto, Calgary and Vancouver.

It is rarely dull in retail and the Canadian retail market again finds itself in a state of flux. Over the past few years, the sector has experienced “significant” changes, from a wave of foreign competitors to the growth of outlet malls and the latest changes in the department store segment.

CBRE is closely watching two U.S. biggies, Sears and Target, as they struggle to adjust to tough conditions in Canada. Sears is continuing to shrink its real estate footprint while Target again tackles its distribution network and product offering.

While the condo sector deservedly gets all the attention in the rental sector these days, it obscures the fact purpose-built rental is “arguably the country’s most stable commercial property type,” CBRE states. Given strong fundamentals and record low mortgage rates, expect multi-res to “attract strong pricing and record low cap rates” across most of the country.

CBRE also forecast that REITs, “along with a small group of pension funds, could play a large role on the both the acquisition and development front.” That could result in new, large scale multi-family developments in select markets.

Given the demand for housing and continued low rates, expect another year “in which renter and investor demand grossly outweighs supply.”