Home auctions are relatively new in Canada, but the concept is catching on judging by the pending sale of a luxury estate in Toronto.

New York’s Concierge Auctions announced in late November that a sale is pending on the Bridle Path Estate. The 2.4-acre estate is expected to command the highest price paid in the greater Toronto area in more than two years. 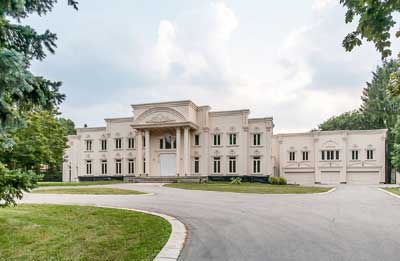 The house auction attracted more than 10,000 website visits from 114 countries, with the U.S., Canada, U.K. and France leading the way. A total of 1,053 prospective buyers were identified and five bidders participated.

The home went under contract with Barry Cohen of Re/Max Realtron Realty. Although initially  skeptical of the auction process in Canada, Cohen said in a statement he’s now one of the “converted.”

Market not educated on process

“It’s not that the Canadian mentality isn’t ready to embrace the auction process, it is just that our market has not yet been exposed and educated about it,” he said.

Earlier this year, Jon Hall, marketing manager of the Realtors Association of Edmonton, said he’d heard of the practice in other markets such as the U.S., but rarely in Canada.

In the summer, it took seven minutes to auction off an Edmonton luxury condo, owned by Dave Ritchie, co-founder of Ritchie Bros. Auctioneers, for $3.25 million.

And Touchstone on Lake Muskoka had been selling vacation time slots through an online auction process. The ownership resort had been taking minimum reserve bids for one-eighth fractions.

Prices ranged from $4,500 for studios to $27,500 for three- and-four-bedroom villas, while four-bedroom cottages went for $62,500. Touchstone held two successful rounds of auctions.

Auctions in the luxury market

So far, residential auctions have mainly concentrated on the luxury market.

The Toronto Bridle Path estate is a case in point. The house features eight bedrooms, 14 bathrooms, a grand ballroom, a theatre, indoor and outdoor pools and a tennis court.

Concierge Auctions are active in 25 U.S. states, carrying valuations from $2.5 million to $20 million. The principals of the company have been involved in the transfer of more than $2 billion in luxury properties over the last decade. The firm has sold more than $500 million in properties since its founding in 2008.