The tony stretches of Vancouver, Toronto and Calgary have a long way to go to match the top rents in world centres such as New York, Hong Kong and London, but they are gaining ground, according to a new report from Colliers International.

Toronto’s Bloor Street has kept its status as the most expensive haute couture home for retailers in Canada with an annual lease rate of US$315 per square foot (a 1.6 per cent increase).

But it is in the West where the high-end retail strips witnessed the largest year-over-year gains in rents.

The upward trend stopped dead beyond Toronto, however. Many premium locations remained unchanged or even saw a decrease in lease rates such as Montreal’s Rue de la Montagne (US$60, a 25% decrease) and Halifax’s Spring Garden Road (US$60, 7.1% decrease). 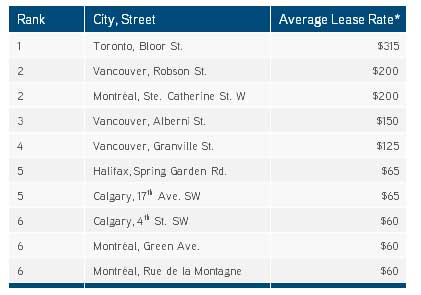 * Average annual lease rate in US$ per square foot. To review the full list of Canadian and other cities around the world, go to https://bit.ly/1fXFHxK to download the full report.

Pushing in, pushing out

“In some cases, the international brands have come in and replaced indigenous or otherwise independent local brands but they have also found a place elsewhere,” observed the Vancouver-based executive. “Granville Street in Vancouver’s downtown has really benefited from the shift to Robson Street to having a more mall-type mix.

“I would never say that there is zero space available for a tenant to locate in Vancouver or any market downtown in Canada because of the influx of foreign brands. What has happened is it has benefited other streets in the downtowns.”

Overall, Colliers is observing increases in rents on secondary shopping streets and well-located shopping malls (Yorkdale, Sherway and Square One in Toronto) as high street rents live up to their name.

Colliers noted that not every big city will turn into a world-class shopping destination. In Canada, likely only Toronto and Vancouver will achieve that status.

“Canada is a really good example of what is happening at the global level, where there are a couple markets that really achieve the high point of what rent can be charged,” said Smerdon. “At the global level. it is New York and Hong Kong and in Canada the high points are in selected areas in Toronto, Vancouver and some areas of Montreal.”

After those cities, there is a “fairly steep drop” for rental rents in the prime shopping areas for major Canadian markets.

Vancouver and Toronto have performed so well in part because they are major tourist destinations.

“If it was just based on residential spending potential we would have a similar rent for all our high streets,” he said. “But when you factor in the tourists, that is what pushes places like Toronto, Vancouver and the top ones around the globe through the roof.”

The tourism effect is a major reason why Vancouver high street rents are about three times what they are for Calgary. “Calgary’s incomes and spending propensities are higher than anywhere in country so what it shows is the importance of the tourism market for those luxury brands,” he said.

Toronto’s top rents on Bloor of US$315/square foot also show that Canada’s largest city still has a long way to go to achieve that “world-class” status it so badly wants.  According to Colliers, the priciest space is on New York’s Fifth Avenue (US$3,052), Hong Kong’s Queen’s Road Central (US$2,087) and Canton Road, Tsim Sha Tsui (US$1,994), New York’s Madison Avenue (US$1,325) or London’s Old Bond Street (US$1,223) pay between four to 10 times the lease rate for the same floor space of premium locations in Canada.

“. . .  relatively low lease rates in Canada, compared to other high-end streets around the world, has not gone unnoticed by luxury brands and retail chains that are looking to set base and leverage our growing buying power while paying relatively low overhead,” said Mary Mowbray, senior vice-president of retail with Colliers International.