Given how difficult it is to acquire trophy office towers in Canada, Manulife Financial Corp. (MFC-T, MFC-N ) wisely decided to fish where the fish are:  in the U.S. 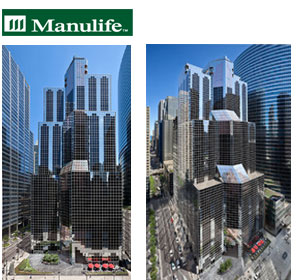 The addition of the One South Wacker tower swells the Manulife portfolio in Chicago to more than seven million square feet centred on the city’s Loop/ central business district.

“Chicago has been a consistent investment market for us going back to the 1970s,” said Ted Willcocks, gobal head of Asset Management, Manulife Real Estate. “We have in the last number of years taken a greater interest in the Chicago Loop and the CBD and currently we are sitting at close to five million feet with a strategy that focuses on the West Loop, Central Loop and East Loop.”

That gives the company “a fully diversified core offering in the Chicago marketplace,” he concluded.

Manulife covets space in the country’s third-largest city for a host of reasons: “It’s the centre of the country, it is incredibly strong, one of the largest economies in the United States, it is a wonderful transportation hub, supply constrained, it has strong economic growth, it has strong real estate fundamentals.”

Add in strong political leadership for a city noted for its strongarm mayors.

“Mayor Rahm Emanuel has done a superb job in terms of attracting firms from outside of Chicago, from the suburbs, into the downtown. It has a growing sort of millennial live-work component happening, and you have a very healthy and thriving tech community continuing to grow in various nodes.”

The growth of the tech sector in the Midwestern city is taking place within the Loop and in the River North neighbourhood once home to factories and warehouses.

“That is driving quite a bit of the interest in office space,” said Willcocks. “For us, office using employment and office using growth is the key to our investment criteria.”

One South Wacker, built in 1982 and renovated in 2014, is LEED Gold certified. Located at South Wacker and Madison streets in Chicago’s West Loop submarket, it joins other Manulife-owned or -managed properties such as 55 West Monroe, 191 N. Wacker, 200 S. Wacker and 150 N. Michigan Avenue.

The One South acquisition is the latest example of Manulife’s “gateway” strategy focused on seven of the most important U.S. cities (at least by the company’s estimation). Besides Chicago, the gateway list includes Boston, Los Angeles, New York, Washington, San Francisco and Atlanta. (The company continues to eye Seattle as a candidate for its eighth gateway market).

Manulife also covets Windy City real estate because it is a relative bargain compared to some of its other hunting grounds, Willcocks explained.

Manulife is not on its own when it comes to kicking the tires on Chicago office space.

“The coastal markets, Los Angeles, San Francisco, New York, Washington, Boston, the pricing is getting very expensive and that is forcing a lot of both domestic and foreign capital to look inward – and what becomes prime on a lot of people’s radar is Chicago.”

Through its U.S. unit, Manulife last year completed five deals totalling US$516 million. So far this year it has made three acquisitions: One South Wacker, a multi-family property in California and another purchase in California of a multi-parcel office portfolio that is awaiting closure.

Beyond its seven-city gateway strategy, its bias can be summed up as class-A office-focused.

“We tend to be buyers of core, class-A trophy CBD properties,” said Willcocks.

The Toronto-based executive noted it is a strategy far easier to execute south of the border. “For a core CBD office building to become available in Toronto, Montreal or Calgary or Vancouver is a very rare offering.”

Compare to that to the States, “where you will find at any given time there are a number of significant sized office buildings for sale.”

Willcocks expects more deals to be secured over the balance of the year with a tally expected to be ahead of last year’s.

The Manulife/John Hancock real estate portfolio is diversified by geography and asset type: prime office and industrial, and “select” retail and multi-family residential properties, in key metropolitan centres in Canada, Asia and the U.S.

The global real estate portfolio represents assets under management of US$13.2 billion with properties totalling more than 55 million square feet.