Manulife developing a gem of an office tower in Calgary

Manulife Real Estate is making a striking new addition to its Calgary portfolio with construction of a 27-storey, 564,000 square-foot office building in the heart of downtown. 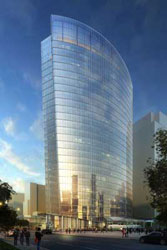 “We’ve looked at a number of assets on the Calgary market and we feel it’s more prudent to be developing than it is to be buying existing stock given the amount of infill in Calgary,” says Ted Willcocks, global head of asset management at Manulife Financial’s real estate arm.

Existing building to be demolished

Manulife will demolish an aging 88,000- square-foot office building to make way for 707 Fifth (image below), located appropriately enough at 707 5 St. S.W. It will target LEED Gold certification and include an on-site conference facility, fitness centre and landscaped gardens.

With floor-to-ceiling class windows, the elliptical-shaped building will provide outstanding views of the city core and the Rocky Mountains when it opens in March 2017. Construction is expected to get underway in early 2014.

“We’re trying to make as many of our new acquisitions and developments LEED-certified,” Willcocks says. “Tenants are demanding new workspace environments.”

Calgary’s 707 Fifth will be designed by architectural firm Skidmore, Owings & Merrill, known for their work on Terminal 1 at Toronto’s Pearson International Airport and for the U.S. Embassy in Ottawa. The tower will be managed by Calgary’s Pivotal Projects.

Brion Energy will be lead tenant

“Brion Energy is excited to have a long-term solution to our office space requirements and a place to call home,” says Zhiming Li, Brion president and CEO.

“As a growing company, we have been challenged to find a large block of vacant office space in Calgary’s core that meets our needs. Manulife’s other properties are impressive and Brion can’t wait to be in what we know will be a beautiful facility in the heart of Calgary.”

Four others are ground leases or part of a development site.