As a global player in international real estate markets, Canada’s status as a safe haven for investors may trigger smart money to flock to the country. Montreal has already emerged as one of the winning cities  in a new report on global real estate investment.

Cushman & Wakefield ‘s new report Winning in Growth Cities 2013-14 cites Canada as a top destination for investment in 2014, especially “for the risk-averse looking for capital preservation or for those that can take more risk in markets with an under supply, such as offices or residential in Toronto or Vancouver.” 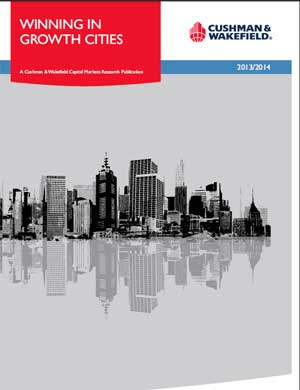 Toronto no match for behemoths

The report identifies the winning cities in the current international real estate investment market and also looks at the largest and fastest-growing cities in investment terms and differences in pricing, as well as cross-border demand and activity.

North America had 15 of the top 25 fastest-growing major markets, with only Montreal breaking up the American domination.

“For Montreal, the shift in the epicentres is one of the key drivers of activity,” Cushfield & Wakeman’s senior managing director of Quebec, Bernie Marcotte, said in a release.

“The downtown core is shifting and Sherbrooke Street is evolving. Office buildings are now becoming more attractive opportunities for residential and mixed-use investors much like we’ve seen developed in Toronto around Maple Leaf Square.”

Surprisingly, Calgary is seen performing strongly on several charts, but fails to register within the report itself. In the industrial sector, the Western city shows the highest gain between 2012 and 2013 of any of the 50 cities listed – a whopping 305.9 per cent.

In multi-family investment, Calgary shows a leap year-over-year of an astonishing 1,529.1 per cent, again by a large margin the biggest percentage gain of any city on the top 50 list.

For the third consecutive year, New York remained the largest global real estate investment market, with volumes rising 39 per cent to US$49.2 billion in Q2 2013. London holds onto second place overall with a six per cent increase in investment volumes, totalling US$32.3 billion.

Los Angeles showed the fastest growth of any of the top 25 cities and leaped ahead of Toyko to take the third position.

In the top 25 cities for investor capital, offices are most in demand, but they lost market share during the last year from 48 to 45 per cent while the residential market increased year-over-year from 18 to 26 per cent.

This trend reflects a move on the part of the largest global players, who previously concentrated on office, and are now broadening their interest, particularly in large mixed commercial and residential developments.

Global flow of cross-border capital reached US$170.7 billion in the 12 months to Q2 2013. “Most indicators suggest property demand will both increase and broaden to embrace new markets and a higher share of investment will be cross-border as investors increase their risk tolerance,” Carol Barel di Sant’Albano, Cushman & Wakefield’s executive chairman, said in a release.

According to the report, market power now increasingly lies within cities rather than nations. “Cities are more important in market terms than their size suggests – with the top 100 accounting for 13 per cent of population, but 38 per cent of GDP. However, what is even more notable is that the same cities account for 86 per cent of property investment activity.”

The report identifies drivers of city success including increasing attention to human capital, such as education and skills, but also health and living standards; the ability of government to deliver in both action and accountability; and technology, particularly when it comes to dealing with issues of congestion and population density and keeping people and goods moving.

“Many of these factors feed into the brand of the city,” the report says, “and this is becoming increasingly important in demonstrating the qualities of an area through events, attractions and experiences. The brand then adds value to the city but also to its real estate market.”