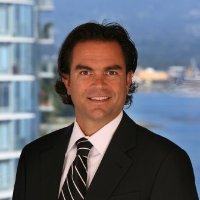 Martin Charlwood has a new role at the real estate conglomerate that bears his family name. Vancouver-based Charlwood Pacific Group recently announced it has appointed Martin as CEO of the company’s real estate division.

Most recently Martin was president and COO of Uniglobe Travel International and vice-chair of Century 21 Canada. During his time at Uniglobe, the company extended its reach into Germany, Italy, the Middle East, Southern Africa, India, China, South America and Australia.

New York’s Travel Agent Magazine has called Martin one of the travel industry’s rising stars and he’s been featured in the Wall Street Journal and Fast Company.

Martin’s father, Gary, is the founder, chairman and CEO of Charlwood Pacific Group.

Charlwood replaces Don Lawby, who is retiring from his long-time role as president and COO of the group’s real estate division.

The Charlwood Pacific Group specializes in the franchise industry. The company developed the Century 21 brand into one of Canada’s leading real estate organizations; founded Centum  Financial Group, one of the fastest-growing mortgage brokerage companies in the country; and recently launched Real Canadian Property Management.

In 2010, the Charlwood Pacific Group gained the exclusive territory franchise rights to the Real Property Management brand in Canada, and first rights for future expansion of the brand in Germany, France, Mexico and Spain.

The franchise offers a wide range of services including an online tenant payment portal with incentives for on-time payment; centralized accounting; rigorous screening including criminal, credit, income and employment checks; and cost-effective maintenance.

“Property management is a lucrative industry once you have the tools to maximize returns and lessen the hassles of day-to-day business for everyone involved.”

The group’s origins date back to the 1970s when Gary Charlwood founded his first real estate company, Hunt Realty. He invested the capital from that company into the purchase of the Canadian master franchise rights to the Century 21 Real Estate brand, its first expansion outside the U.S.

Gary is an inductee to both the International Franchise Association and American Society of Travel Agents halls of fame, where he is listed alongside such luminaries as Walt Disney and the founder of McDonald’s, Ray Kroc.