Construction has officially begun on Industria 440, a $200-million industrial park in Laval, Que., that could provide up to two million square feet of industrial space. 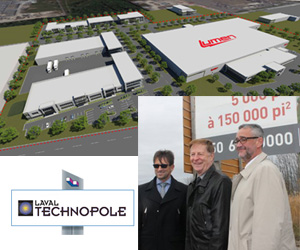 Slated to be completed in 2017 and built in four phases, the project will house as many as 10 multi-condo industrial buildings providing as much as 150,000 sq. ft. of industrial space each. Occupancy is scheduled to begin next summer, with additional phases to be built according to demand and client needs.

Industria 440 is located in an industrial area on the service road of highway 440 and is near highways 13 and 15, making it “the best spot in Laval for industry,” says Michel Grennan, president of Cosoltec, the project’s developer. The site is also near a highway that allows travelers to the South Shore of Montreal to bypass the congested Champlain Bridge, he says.

Laval mayor Marc Demers notes the nearby highway 440 and 15 interchange is the second-busiest in the province, with traffic of 245,000 cars daily, only slightly less than Montreal’s Turcot interchange.

The buildings will be LEED-certified, which has become “an obligation, not a trend,” says Grennan.

One major tenant, so far

The project contains one major tenant so far: the head office of Lumen, an electrical materials distributor. Construction is well underway for the company’s 385,000-sq.-ft. head office and distribution centre on the site at a cost of $75 million.

The aeronautics, transport, food and high tech industries are among the industries that are being eyed as clients for the industrial park, Grennan says. He hopes the project will create industrial clusters of companies from similar industries.

Grennan is confident demand for space in the new industrial park will be high due to a scarcity of land slated for new industrial development in the Montreal area.

Cosoltec, founded in 1997, has developed a variety of residential, commercial and industrial buildings in the Montreal area, including a $25-distribution centre for Molson Coors Canada and $100 million worth of industrial space in the Montreal suburb of St. Laurent. Other clients include National Defence Canada, Metro, IGA and the Université de Montréal.

In addition, the company is building the $47-million condo, 10-storey building called Muv in the Rosemont neighbourhood of Montreal that will house 186units. The condo project has also received a Fonds immobilier de solidarité FTQ investment of $3.8 million.