MBH aims to expand brand presence with appointment of COO

“MasterBuilt Hotels is one of the most exciting stories to come out of the Canadian hotel industry in a long time and I’m extremely proud to be a part of it,” Watson, former vice-president of Superior Lodging, said in an email to Property Biz Canada. 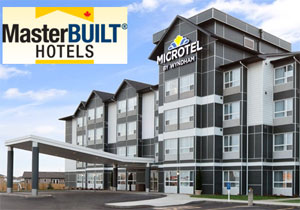 “Canada has contributed some of the world’s greatest hotel brands and companies (Four Seasons and Fairmont to name two), and MasterBuilt has the people, relationships and capital to do something just as special over the course of time.”

Watson, who will report directly to company principals Jay Westman and Marc Staniloff, is expected to provide vision, strategy and leadership to increase the brand’s presence in Canada.

“Eric has spent the previous 12 years in the resort and hotel industries in executive leadership roles delivering impressive growth and profitable returns for entrepreneurial companies and investors,” Marc Staniloff, chairman and CEO of Superior Lodging, a JV partner in MBH, said in a statement.

“He is highly respected by our partners, employees and industry peers and has already proven to be a tremendous asset in shaping the company’s strategy and delivering exceptional results.”

Westman, chairman and CEO of JWI Investments, a JV partner in MBH, said the appointment of a COO marks a major milestone for the company, demonstrating its commitment to becoming best in class in the industry.

“The promotion of Eric to chief operating officer provides MBH with the dedicated focus and dynamic leadership to become a truly great company, which is the only way I know how to run a company,” Westman said in the statement.

MBH has a mandate to develop and open 75 Microtel by Wyndham hotels within 25 years. Since November 2012, MBH has opened Microtel hotels in Estevan, Sask.; Weyburn, Sask.; Lloydminster, Sask.; Blackfalds, Alta.; and Timmins, Ont.

The first Microtel in Canada opened in Estevan and gave the public its first glimpse into what Watson then called “a concept designed and purpose-built for the Canadian lodging landscape.”

Watson said the decision to locate in Estevan was based on its “booming economy and strong demand for quality lodging in the region” which seems consistent with other locations currently under development.

There are Microtels under construction in Red Deer, Alta; Whitecourt, Alta.; Fort St. John, B.C,;  Kitimat, B.C,; Kirkland Lake, Ont.;  and Sault Ste. Marie, Ont. Plans are also in the works for the construction of another 10 within the next year.

MBH is also developing a 225-room dual branded Marriott hotel in Calgary’s Seton district, set to open in the fall of 2015.

This $47-million project will provide a total of 224 rooms through two separate hotels situated side-by-side and connected by a common pool area with a waterslide. Designed by Norr Architects Planners, the two buildings are set at right angles around a shared surface parking area. Both will have underground parking.

The seven-storey Courtyard by Marriott will feature 121 guest rooms specifically targeted at business travelers. The six-storey Residence Inn by Marriott brand will have 103 guest suites in the first true extended-stay property in South Calgary.

MBH combines interests in the development, investment, construction and operation of the Microtel hotels brand within Canada. Founded in 2011, the company capitalizes on the expertise of industry leaders Superior Lodging Corp. and Jayman MasterBUILT / JWI Investments. The combined company has developed more than 150 hotels and has managed billions of dollars in construction projects.

MBH owns the master territorial development rights for the brand in Canada and works with Wyndham Hotel Group to develop franchise opportunities and with Wyndham and hotel owners from early planning stages to design and construction management on new builds, renovations and refurbishments to ensure success. The company also manages a portfolio of Microtel and Super 8 Hotels, primarily in Western Canada.

Jayman MasterBUILT has been recognized with eight Builder of the Year Sam Awards in Calgary and seven in Edmonton in addition to Top 50 Best Managed Companies – Platinum Member, J.D. Power Awards for Overall Customer Satisfaction and the  Alberta Awards of Excellence. Superior’s award-winning history includes the 2003 Pinnacle Award for Canadian Hotel Company of the Year.

The Microtel Inn & Suites by Wyndham brand encompasses more than 320 hotels in the United States, South America and Asia.

“This is a very exciting time for us and believe that we now have the team in place that will establish Microtel by Wyndham as the leading select service brand within Canada,” Staniloff said.