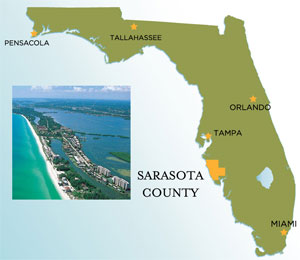 This marks the largest real estate purchase for Mattamy in 10 years of U.S. operations and is also one of the largest residential land transactions in the U.S. in that period.

“Tracts of land that are this size are extremely rare, they don’t come to the market very often,” Peter Gilgan, Mattamy’s founder and chief executive officer, said. “What was compelling about the deal was that the property has development timelines that are almost generational in length.”

Development of the primarily undeveloped site will include 6,000 acres within the City of North Port. The remainder of the land is in unincorporated Sarasota County and the 20-plus year project is expected to get underway in 2016.

Best place to live in Florida

“Florida is a desirable southern destination and given the bulge in population that baby boomers represent, we believe this would be a great place for retirees to relocate to,” said Brian Johnston, Mattamy Homes’ chief operating officer.

Sarasota is located along the coast of the Gulf of Mexico between Tampa and Cape Coral. It is known for its white beaches, blue waters and five islands. “Sarasota has always had a sought-after lifestyle,” said Michael Moulton, a realtor with Florida real estate brokerage Michael Saunders & Co.

“Sarasota has the amenities and culture of a city of 1.5 million people although it has just under 52,000 residents, and buyers get more bang for their buck here,” Moulton says. “We’re on the radar for anyone considering Florida as the place to retire or semi-retire.”

Vanguard Land, a local real estate development and investment firm, will be a minority partner in the property.  Johnston said the firm will provide a high level of planning and direction and, being located in Sarasota, is appropriate to lead this aspect of the development.

“Our plans at this point are still being formulated, but we anticipate taking this very large and well-positioned piece of land and creating a series of large communities that would be developed by Mattamy and select builders who share our vision for the property,” Johnston said. “As part of all this we’re going to continue to study the market’s needs and wants, and ensure that each piece of land is targeted in the proper direction.

“This will include working closely with the municipalities so that we adhere to all their requirements before moving forward.”

Johnston says many of the specific details of the communities, including sustainability goals are among the details yet to be determined. The project though will be designed to include a variety of community and product types at an array of price points.

“At this point we can imagine 10 to 20 communities, including a golf course community, a lake community, and a community focused on open spaces,” he said. “We expect the area will be largely retiree targeted but anticipate there will be local buyers as well.”

The site is also approved for three million sq. ft. of commercial space although Johnston says the final square footage will likely not be that high.

Land in Florida is still attracting interest according to Dean Saunders owner of Coldwell Banker Commercial Saunders Real Estate a Florida brokerage that specializes in land and who produces an annual Lay of the Land Report.

Last year, 2013 will be remembered as the year of ‘big deals’ Saunders said in his report, as several large, historic, significant and unique transactions took place including “the successful closing in early 2014 of more than 380,000 acres in North Florida for $562 million.”

Another big deal occurred in April when approximately 1,619 acres in Polk County’s Lake Hamilton region in Florida sold for $6 million.