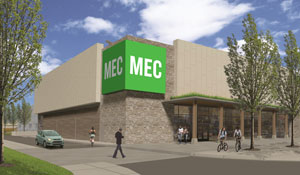 “This is the first time MEC has been part of a residential development, and it only came about because of circumstances at play at the site,” MEC public affairs manager Tim Southam said of the 1.8-acre property at 784 Sheppard Ave. E. near Bayview Avenue that it acquired from Sheridan Nurseries in March 2012.

“The city wants to see higher-density on the site. By partnering with Broccolini Construction, the general contractor for the store development, we were able to put forward a proposal for a low-rise residential development that meets community objectives and complements the store.”

Construction has begun on the 42,000-square-foot store, which is slated to open in the spring of 2016. Work is expected to begin soon on the Park Towns townhouses in anticipation of completion in the summer of 2016. The location has easy access to the Sheppard subway line, parks, Don Valley ravine trails, schools, shopping and theatres.

Broccolini’s experience with residential developments and its previous history building MEC stores (including one in Longueuil, Que. in 2009 and expanding the Ottawa outlet in 2012) allows the outdoor gear retail co-operative to focus on its new store development while Broccolini leads the Park Towns residential project. Southam said this is a one-off development and he doesn’t expect the company to delve further into the residential market.

“Our intent initially was to establish a retail store on the south portion of the site fronting on to Sheppard Avenue, with surface parking on the north part of the site,” explained Southam. “Our plans changed to include a 50-unit stacked townhome complex on the back portion of the site in response to the city’s desire to increase density in the area.

“The store and the townhome complex will each have a separate parking garage, accessible from a common ramp.”

The Park Towns development will include 26 three-bedroom units, 20 two-bedroom dwellings and four one-bedroom suites. All of the SMV Architects-designed units were pre-sold at prices ranging from $250,000 to $565,000 under the condition that final approvals were still pending.

Store will have green focus

MEC has a well-established green building program, which will continue with the new store.

“MEC North York will feature a high-performance building envelope, on-site water management and energy-efficiency measures,” said Southam. “The store is projected to be 48.6-per cent more energy-efficient than the reference building in the Model National Energy Code for Buildings. In part, energy efficiency gains will be achieved by natural lighting provided by the distinctive saw-tooth roof that’s lined with south-facing windows.”

MEC has a commitment to 1% for the Planet whereby it donates one per cent of sales (which totaled approximately $3 million in 2014) to Canadian non-profit organizations that help conserve ecologically and recreationally important areas.

The North York store will be MEC’s second in the Greater Toronto Area, following its King Street West location downtown. The co-op has more than 625,000 members in the region and more than 3.75 million across Canada at its 17 stores. Lifetime memberships cost five dollars.