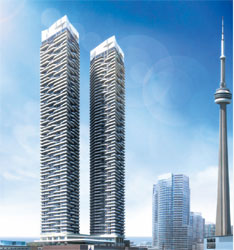 Menkes built nearly one out of every 10 new condo suites sold across the Greater Toronto Area last year, according to a new industry report by RealNet Canada Inc. and the Building Industry and Land Development Association (BILD). The 2013 Strategic Review of the GTA’s housing market demonstrated that Menkes chalked up 1,511 condo sales last year, 9.3 per cent of the overall GTA market.

The company’s cumulative sales in 2013 were nearly double the total sales for the year’s next best-selling developer, according to Alan Menkes, president of High-Rise Residential for the company.

“In a year where both launches and sales were down on an industry-wide basis, Menkes found itself with nearly 10 per cent of the condo market,” Menkes said in a statement.

One reason for the firm’s strong performance came from the company’s Harbour Plaza Residences, the GTA condo market’s top-selling site for 2013 according to the report.

Menkes sold 858 condo units in 2013 in the mixed-use commercial and residential project, slated for completion in 2017. It features 62- and 66-storey towers and will contain nearly 1,500 units.

The unit sizes range from a 331-square-foot studio to the three-bedroom 795-sq.-ft “Marina A” . The buildings will include a sky-bridge connecting to PATH, Toronto’s downtown underground pedestrian walkway.

Menkes credited that latter point as a reason for the building’s early sales success. “We believe the strong market reaction was due to the fantastic attributes at Harbour Plaza, particularly the direct PATH connection, which is a rare feature in today’s condo market,” he said.

The RealNet Strategic Review also reported that Menkes had the fourth-best selling condo site, with 311 sales at its 365 Church development.

While Menkes experienced a good year, the GTA condo industry as a whole did not. BILD said because of low levels of supply, sales of new homes and condos finished 2013 23 per cent below the 10-year average.

“Heading into 2013, we were confident that distinctive locations, iconic architecture and design and smart pricing would drive sales,” Menkes said.

Menkes Developments Ltd. is a fully integrated real estate company involved in the construction, ownership and management of office, industrial and residential properties.