Privately owned Minto Properties Inc. this week announced plans to transform its Minto Suite Hotel into a premium unfurnished and furnished rental property as part of “a strategic shift to provide greater alignment with the company’s growth strategy.” 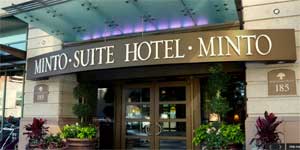 The downtown Ottawa hotel is a bit of an odd duck holding for Minto as it is the only hotel it owns, doesn’t mesh well with its other businesses and would be difficult to sell.

That said, it is apparent the company had a tough time with the decision which is expected to be completed by April and will result in staff reductions and reassignments among the 97-strong workforce.

“Our business has evolved beyond its roots, with Minto expanding its footprint nationally,” said Michael Waters, Minto’s CEO. “This requires us to focus on what we do best and that means making some tough decisions to get out of specific lines of business – ones we are very proud of – but which no longer support our overall business objectives.”

The hotel, currently comprised of 255 hotel suites and 163 furnished suites, was a money maker. Residents of the revamped, 32-storey building are expected to be young professionals who have few options for “premium rental” in downtown Ottawa.

Ottawa is belatedly seeing its own condo boom downtown and Minto is currently developing four towers in the nation’s capital.

The company did not want to sell the hotel because it is part of the four-tower Minto Place which boasts one million square feet of office space and about 45,000 square feet of retail.

“It is a trophy asset and we didn’t see the value in selling,” Waters said. “We thought we could create more value ourselves doing what we do really well versus selling it.”

Minto is owned by the Ottawa-based Greenberg family and Waters, who became CEO last October, is the first non-family member to head up the company.

Minto, which has ambitious plans to break out beyond its Ontario base, first expanded outside of its home province with the purchase of a large multi-residential portfolio in 2012.

As well the company launched its first institutional investment fund (the Minto Multi-Residential Income Partners 1, LP) in which it is managing capital on behalf of five pension funds. It is currently working on creating a second investment fund.

“As we have made an evolution beyond our roots, expanding ourselves nationally, working with pension fund money, we have decided to focus a little bit in doing fewer things better,” said Waters. “As part of that, we are narrowing our hospitality focus. We have run one hotel today, it is really challenging to run one hotel.”

Today, Minto operates a multi-residential portfolio of 17,000 units comprising more than 40 buildings. Acquiring apartment complexes in Canada can be tough for any buyer. Minto’s private, family-owned structure may give it an edge.

“We have been successful in the past working with private families to acquire portfolios that we may be off market. The other thing that makes us different or sets us apart is that we have got a fully integrated platform in the sense that we have a full in-house construction, management and development team,” said Waters.

“We are not sort of bound by the same restrictions that some of the competition, whether they are pension funds or REITs, might have in terms of our ability to bring the full spectrum of development expertise to bear. So we can see value in the intensification and be able to exploit that where others are maybe unable to.”

Waters’ mandate as CEO is to grow nationally in the multi-residential sphere by adding assets under management as well as expanding its homebuilding business in Florida. Minto also has a “big-ist” home building operation in Ontario that builds everything from low-rise and high-rise condo, greenfield tract home developments and medium-density infill. It sold about 1,800 homes in the province last year.

As well, Minto has a commercial real estate business that focuses on development and stabilized income properties that has allowed it to create a substantial urban retail portfolio in Toronto and Ottawa in mixed-use condo and multi-res complexes.

Beyond Canada’s borders, the company is a major homebuilder in Florida, centred around Palm Beach in the eastern part of the state.

In the depth of the U.S. financial crisis of 2008-09, Minto started to snap up property on the Gulf Coast. “We expanded our footprint quite significantly across the state and last year we sold almost 700 homes,” said Waters. He said that the Florida property market has rebounded to pre-recession levels.

“Florida is affordable again,” he added. “For a while there, pre-crisis, prices had moved so high that it wasn’t as affordable as it had been traditionally.”

The Florida homes unit targets “active adult” buyers who are downsizing or entering their retirement years. Prices of its homes range from the low-$200,000 range all the way up to executive homes in golf course communities in the $700,000-$800,000 range.