In amongst the museums and private homes, the proposal for a commercial building took home an architectural design award at the Canadian Architect Magazine’s Awards of Excellence 2013.

The plans for a town centre in the northern community of Gillam, Man., show that when it comes to architectural design, the commercial realm is capable of holding its own with publicly funded buildings. 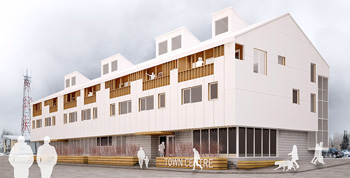 Jurors Karen Marler said the town should be applauded for forecasting and planning for strong growth over the next 15 to 20 years.

“They’ve focused on building community and in doing so are creating a town centre and framework that has the potential to serve their residents well into the future,” Marler said.

The project,  dubbed Gilliam Town Centre by Canadian Architect Magazine, is a 80,000-square-foot mixed-use development currently under construction and funded by Manitoba Hydro. According to Sampson, the $7-million project reflects Manitoba Hydro’s stake as the area’s primary employer.

“Working alongside Fox Creek Cree Nation, Manitoba Hydro has identified that the investment in quality housing is of mutual and long-lasting benefit,” Sampson says in his architect statement.

“The Railway Avenue Housing Project strengthens the core of Gillam by creating a newly invented main street that currently does not exist,” Sampson says. “The first of a series of strong retail corners will be established at the junctions of newly created intersections.”

Sampson is also the creator of the Gillam Town Centre masterplan.

Some of Sampson’s other projects include the design of Winnipeg’s new, $6.5-million, 37,000-sq.-ft. food bank known as Winnipeg Harvest, and the design of Toronto chef Jamie Kennedy’s new flagship restaurant.

Calnitsky Associates Architects has carried out projects in a variety of areas, designing everything from a credit union building in Winnipeg to an expansion to the fitness facility at CFB Shilo in Manitoba.

Despite Railway Avenue Housing Project’s honour, the jury generally decried the lack of strong entrants in the commercial building realm.

Along with the other jurors, Marler said she was “disappointed by the lack of private sector, multi-use projects.” The magazine said such projects gained several awards in past years, but  drew only a “modest number of submissions in the current round relative to the prominence of this building sector.”

Other Awards of Excellence winners included the Fort McMurray Airport, University of Toronto Faculty of Law, the Fifth Pavilion of the Montreal Museum of Fine Arts, and the Waterdown Library and Civic Centre.

The jurors for the awards were:

* Marler, a partner with Hughes Condon Marler Architects and a fellow of the Royal Architectural Institute of Canada.

* Marianne McKenna, a founding partner of KPMB Architects, has directed myriad projects, including work on the Rotman School of Management expansion at the University of Toronto and the Jackson-Triggs Niagara Estate Winery. She is currently working on the revitalization of Toronto’s historic Massey Hall, among other projects.

* Marc Simmons, a founding partner of Front Inc. and the Ventulett Chair in Architectural Design at the Georgia Institute of Technology School of Architecture, has worked as lead consultant on many projects including the new West Block Canadian House of Commons on Parliament Hill in Ottawa.