Competition seemed to be the name of the game in Montreal’s commercial real estate sector in the first quarter of 2015. 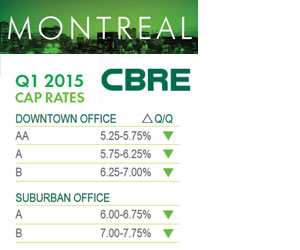 “There’s a limited amount of assets that are being offered for sale, so there’s fierce competition at all investment levels across all asset classes to find the right asset to purchase,” said Alexandre Sieber, senior vice-president of CBRE, which just released its “Canadian Cap Rates & Investment Insights” report for the first quarter.

“That obviously had an impact on the cap rates that continue to fluctuate downward because of the competition level that we have in Montreal.”

Capitalization rates compressed by approximately 25 basis points for most asset classes in Montreal due to reduced borrowing costs, while the city’s office and industrial building vacancy rates dropped in the first quarter of 2015.

“Investors can buy properties, but they don’t pay four cap or five cap,” said Michel Colgan, Colliers International’s managing director for Montreal. “They understand the market and we have better properties price-wise. You’ll get a better return in Montreal than you would in Toronto or Calgary.”

The office vacancy rate for the Greater Montreal Area (GMA) dipped slightly to just over seven per cent in the first quarter, and Colliers anticipates the office market slowing down slightly before accelerating again toward the end of 2015. More sub-leases are becoming available, but that trend is expected to stabilize.

From an investment standpoint, the GMA is coming off its second-best year ever after 2007 with more than $5 billion in investment for transactions of more than $1 million across all asset classes, according to Sieber, who forecasts this year won’t reach that total but should surpass the city’s average of $3.5 to $3.7 billion.

The GMA industrial market’s overall vacancy rate slipped below four per cent in the first quarter, compared to seven per cent just five years earlier, and the economic prospects for this year seem favourable to the industrial real estate industry in Quebec with an expected increase in exports due to a lower Canadian dollar and continued economic recovery in the United States.

Ville St-Laurent, west of Montreal, continues to expand and has the lowest industrial availability rate in the GMA. The south shore of Montreal has the largest amount of major construction — with new buildings in Varennes, Beloeil and Saint-Bruno-de-Montarville — while continued population growth in Laval is encouraging large businesses to launch new projects.

“Multi-residential is definitely the golden child of asset classes in Montreal and is particularly playing a strong defence role for investors based on very strong fundamentals that don’t fluctuate that much,” said Sieber.

“In retail we’re going through the same challenges as other cities in Canada, where you had big announcements about closings of stores like Target,” said Sieber. “But one of the good things about retail is that it adjusts very quickly.

“The typical Target space was about 100,000 square feet and the demand is not necessarily there anymore for those big spaces, but we can fairly easily subdivide that into smaller spaces and target 20,000 to 25,000 square feet and make it available because it’s in demand right now. It’s a phase that we have to go through at retail, but we think it will adjust over time, probably within a period of 12 months.”

“Overall, we’re pretty optimistic,” Sieber said of Montreal real estate. “With the economy picking up in Quebec, with a GDP that will hopefully surpass 2.4 per cent, we see some tenants coming back into the market and trying to find new and better spaces for their operations.”