While the general trend among Canadian cities is lowering tax rates, Montreal appears to have gone the opposite route in an alarming way.

“For the first time, Montreal has vaulted past Vancouver and Toronto and has the highest commercial-to-residential tax ratio in Canada,” said Carolyn Lane, vice-president of membership, marketing and communications for the Real Property Association of Canada (REALpac).

Lane made her remarks in conjunction with the release of a new report, the 2013 Property Tax Rate Analysis, produced for REALpac by the Altus Group. 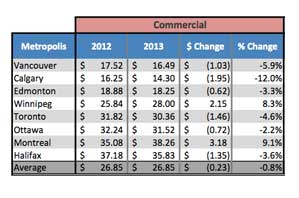 Canadian cities are bringing their commercial tax rates down in an effort to promote business, REALpac said, noting residential tax rates have decreased at an even faster pace.

“The continued reduction of excessive property tax burdens on commercial and industrial properties will make cities more competitive, promote jobs and investment, result in increases to the property assessment base and subsequently generate more stable and sustainable revenue,” the report said.

Montreal, Toronto and Vancouver all posted commercial-to-residential tax ratios in excess of 4:1. REALpac advocates for a ratio of 2:1, maintaining it is needed to support healthy economic growth and can be achieved through gradual reductions.

Montreal’s commercial-to-residential ratio increased by 2.7 per cent year-over-year, reaching a new mark of 4.40 compared to Vancouver’s 4.35 and Toronto’s 4.07.

The report noted Winnipeg and Montreal raised taxes in 2013, while all other cities reduced them.

This is the second time in recent weeks Montreal has been taken to task for high tax rates. In the C.D. Howe report, What Gets Measured Gets Managed: The Economic Burden of Property Taxes, the authors found the business property tax on top of the marginal effective tax rate gave Montreal the highest rate at 43 per cent.

Like REALpac, the C.D. Howe report called for reduced taxes and for much the same reasons. That report argued the tax burden can “tip the balance in competition for capital in Canadian cities and provinces.”

The REALpac report said Toronto had been on a “watch list” for many years for excessive commercial tax rates out of balance with residential taxes. The result is the taxes have deterred downtown business and job growth and commercial real estate investment, REALpac maintained.

Calgary and Edmonton have made the most significant year-over-year improvements to their ratios, with 14 per cent and five per cent decreases, respectively. Toronto, Halifax and Winnipeg experienced decreases between one and 2.2 per cent.

Calgary, Vancouver, Edmonton and Winnipeg have the lowest estimated property taxes per $1,000 of commercial assessment. Toronto, Ottawa, Montreal and Halifax posted the highest taxes in that bracket.

REALpac is Canada’s leading industry association for investment property leaders, with members owning in excess of $150 billion in real estate assets. The association works to influence public policy, educate government and the public and to ensure stable and beneficial real estate capital and property markets in Canada.