Major infrastructure repairs currently underway in Montreal, often compared to Boston’s “Big Dig” of a decade ago, will provide a boost to the commercial real estate market according to a recent Colliers International report. 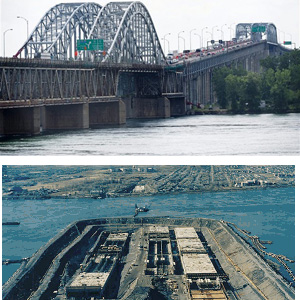 “It’s difficult to quantify the economic impact of all of this on the city, but the general sense is that insufficient infrastructure is essentially slowing down the sustainability of the city moving forward and is slowing down economic development because of traffic flow, congestion and the inability to move people and commodities efficiently in and out of the city,” said Benoit Beauchemin, Colliers International’s senior analyst for market intelligence in Montreal.

There are nine major projects underway, or soon to start, that could last until 2020.

They include overhauls of parts of the metropolitan highway system, major maintenance of the Honoré-Mercier Bridge (top in image), the refurbishment of the Louis Hippolyte-La Fontaine underwater bridge-tunnel (bottom in image), the restoration of Sainte-Catherine Street and the replacement of the Champlain Bridge that connects the island of Montreal to the south shore.

“It’s a mix of life expectancy being reached and in some cases investments that have not been done over the years,” said Beauchemin.

This may lead to commuters being forced to find alternate routes to work and present challenges to landlords attempting to attract new tenants or retain current ones.

Comparisons to the “Big Dig”

Boston went through even larger changes with its “Big Dig,” which rerouted a highway and built tunnels and a bridge in the heart of the city from 1991 to 2006, so it provides an apt comparison for what Montrealers might expect as a result of the construction projects.

Boston residents and businesses endured many inconveniences and vacancy rates went up while rents went down during the peak construction period between 2000 and 2006. But bigger economic forces were at play, including an American recession in the early part of the decade and the global financial crisis that followed, which likely had an even greater impact than the “Big Dig.”

“You have to put those construction sites in perspective and look at the big picture and the economy in general,” said Beauchemin.

“Let’s hope that the economy holds while all of those projects are going on. If the economy holds, we’ll be fine. It’s just going to be a few years of tougher conditions, but we’ll get through.”

Restaurants and small shops could be most affected

Restaurants and small shops were impacted most in downtown Boston, as they had more difficulty attracting customers, and Beauchemin expects something similar in Montreal.

“For the office market, there are long-term advantages for businesses to be in the downtown core of any city. We don’t expect them to go because of a few years of construction work.”

The report indicates one of the lessons to be learned from Boston is the need to foster a collaborative relationship between landlords, tenants and project leaders. Landlords and tenants need to be kept informed at all times about upcoming stages of construction.

“If you know what’s going to happen, you can adapt more easily,” said Beauchemin.

According to the report, landlords can try to retain and attract tenants during major construction phases by: trying to improve accessibility to public transportation, bicycle-sharing stations and short-term car rental locations; allowing flexible work hours and more working from home to help avoid congestion during peak commuting hours; developing sports facilities to provide physical activity and showers for those who bike to work; and adding an on-site daycare centre to minimize transport times.

“Landlords have to listen to the needs of their tenants, and those needs may vary from one building to another and one tenant to another,” said Beauchemin. “It’s about understanding needs and coming up with the best ways to address those needs.”

The removal of the above-ground interstate highway that ran between Boston’s financial and seaport districts led to a waterfront development boom. Old and vacant or underused industrial plants were converted into condominiums and offices.

“We’re looking forward to the end of these projects and the development it will unlock for the city, just in terms of the improved capacity for the road systems to move people and commodities around,” he said.

“Once all of the projects are done here in a few years, we could expect another push of development of the city. We believe that it’s worth the wait.”