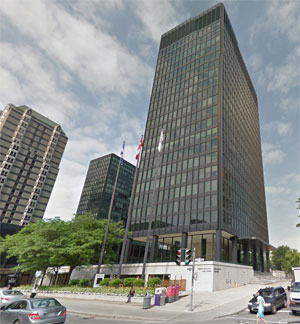 Located in the City of Westmount, one of Canada’s wealthiest neighbourhoods, Westmount Square occupies most of the city block bordered by de Maisonneuve Boulevard West, Sainte-Catherine Street West, Wood Avenue and Greene Avenue.

Its office tenants include Investors Group and RBC Royal Bank.

Creccal’s 328,558-square-foot purchase included the two office buildings and retail space, an underground shopping centre with about 35 shops. The residential component was excluded from the deal.

The buildings were acquired from Elad Canada for an undisclosed price after spending three months on the market. Elad, which had owned the property since 2001, is a Toronto-based company with offices in Montreal.

It owns various residential development projects and income-producing properties, including the master-planned communities of Le Nordelec and Cité Nature in Montreal and Emerald City in Toronto.

“The owners (Elad Canada) had tried to convert the building to residential and it didn’t work, and there was roughly a 28 per cent vacancy rate when it was taken to market,” said Scott Speirs, vice-president of JLL’s Capital Markets Group.

“Westmount Square is historically one of the best-leased office buildings in Montreal. Prior to Elad going through the process of trying to convert it to residential, the vacancy rate in the five years before that was less than five per cent.”

There was local, national and international interest in Westmount Square. There were 90 confidentiality agreements executed and two rounds to the sale, according to the brokers.

“It just goes to show you that when trophy properties are potentially available, the market is very, very keen for this type of asset,” said Primecorp chief executive officer Aik Aliferis. “Getting your hands on an asset like this in any of the major cities in Canada is a real achievement and a feather in the cap of Creccal Investments.”

It also owns the 1.2-million-square-foot The Crossways residential, retail and office complex in Toronto.

Creccal is ready to start renting

“The main goal is to fill up vacancies and build the building economically,” Di Geso said of Westmount Square. “Structurally, it’s been very well-maintained.”

“As soon as the word gets out that the building is back to its normal day-to-day business of being rented and not vacated, people will come because it’s in a central location, it’s iconic and there are a lot of people who want to be in that building.

“People were scared because of the uncertainty of what the plans were for the building. But that’s a page in the history book that now is closed and we’re moving forward.”