For the past few months, Morguard Corp. has been on something of a buying spree, scooping up shares of embattled Temple Hotels Inc. 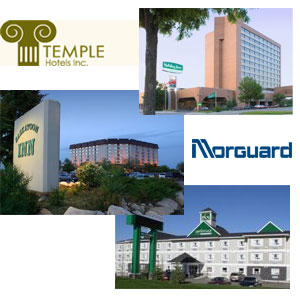 In its latest announcement, the Mississauga, Ont.-based real estate giant said it acquired 18.3 million common shares for $20 million, raising its stake in the company, to a total of 24.4% of Temple’s issued and outstanding common shares.

Taking into account convertible debentures of Temple Hotels (TPH-T) owned by Morguard (MRC-T), that stake could rise to 30.4 per cent of the issued and outstanding common shares on a partially diluted basis.

Morguard has said its purchases stretching back through the spring and summer are for “investment purposes,” but the company now finds itself as the largest shareholder of Temple, which has suffered through a falling stock price and shareholder activism.

“Somebody else had started a hostile change or something, and then I stepped in and tried to stabilize” things, said Morguard CEO Rai Sahi, who was named as a board member of Temple this year.

“I think they are going through a tough time with the oil price drop and (being) pretty big in Alberta. Of course, their stock has come off as you have seen, cash flow has been impacted and they have been cutting dividends. It has not been a happy situation.”

Winnipeg-based Temple was the target of a proxy battle by a group of dissident shareholders in May and June that resulted in a revamped board of directors.

The dissenter investor, Halifax-based Centennial Group Ltd. (a five per cent shareholder), originally objected to Temple twice cutting its dividend, having financial, operating and governance issues which included paying an external manager “whose interests are not aligned with Temple’s other shareholders and who has a long history of poor operating performance and related-party dealings.”

Temple is managed externally by Shelter Canadian Properties Ltd.  Arni Thorsteinson, Temple’s CEO, is also the president and principal of Shelter as well as being the founder of Temple, Lanesborough (LRT.UN-T), Huntingdon Capital and White Rock REITs. Huntingdon Capital was acquired by Slate Properties in 2014 and White Rock REIT was purchased by Dundee REIT, now Dream Office REIT, in 2012.

Morguard’s Sahi does not put Temple’s problems at the feet of Shelter but rather its industry-leading leverage and a slumping economy in Western Canada.

“All the assets are OK”

“I don’t think management is an issue. It is just going through a cycle of too big an exposure on the oil and gas side of it. I think the biggest impact is in Calgary and Saskatchewan. All the assets are OK, it is just a question of how do you predict what the oil prices will be?”

Sahi knows the economic issues Alberta in particular is facing due to the plunge in world oil prices.

Morguard’s owned and managed portfolio of assets is valued at more than $19 billion. Morguard’s office properties in Alberta are facing the slowdown like everyone else.

“The one good thing in our business is you have long-term leases. So far we are 90% plus occupied so we don’t really have an exposure. But our tenants are going through a tough time.”

With operations throughout North America, Morguard is well-positioned to ride out the Western slump and see gains elsewhere on the continent.

Sahi said he is “happy” with the federal election that produced a majority Liberal government. “We have stability.”

He also looks at the “flipside” of the energy price squeeze.

“The positive impact on everybody, the cost of usage of the fuel goes down, so you have increases in disposable income to families and communities. Everybody drives a car.”

That goes double for the U.S., where Morguard is a player. “The U.S. is the biggest user. They produce a lot too,” but as a net consumer of oil, it is a boon to their economy by priming the pump of consumer spending.”

The other big news for Morguard is its proposed real estate development at the Glen Abbey Golf Club, which has met with a predictable outpouring of opposition from resident and government officials in Oakville, Ont.

A proposal from Morguard calls for the construction of nearly 3,000 residential units combined with a mixed-use office and retail space. The development would require rezoning by the municipality.

Sahi is unfazed by all the negative attention.

“That a process that you go through. Even when I build an apartment building I go through that. When we built two buildings in Forest Hill, we went through a lot of opposition before we built it, that is natural.”

Sahi is also CEO of ClubLink, a company he won control of in 2007. While the sport of golf is in the midst of a demographic decline, the real estate magnate can’t help but eye all the underutilized land surrounding his dozens of courses in Ontario and Quebec.

“It is a lot of landholding, too.”