Most expensive streets for office space span the country

Bay Street is still king. The street spanning the heart of Toronto’’s financial district topped the list of Most Expensive Streets for Office Space in Canada for the third straight year. 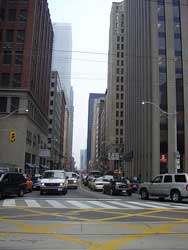 It was one of nine included in Jones Lang LaSalle’s third annual report that ranks the streets with the highest office rents.

Bay Street is home to numerous financial head offices, helping boost office rents to $73.54 per square foot. It also posted the highest percentage difference between the average street rent and the top street rent, with a difference of 133.6 per cent.

Not surprisingly, the second-most expensive street is in Vancouver. The West Coast city’s Burrard Street has moved up from third spot in 2012. The street forms the centrepoint of Vancouver’s downtown and commands $65.91 per sq. ft.

It’s possible that Burrard’s fortunes will rise even further on the recent news of the $500-million Burrard Gateway project. That project includes two residential towers 35 and 55 stories in height, respectively. The latter will be the third-tallest building in the city.

Calgary’s 2nd Street SW came in third at $59.72 per square foot. Like Toronto’s Bay Street, 2nd Street SW runs through the Alberta city’s financial district and is home to some of the city’s tallest buildings.

“Location is everything,” Brett Miller, president of Jones Lang LaSalle Canada, said in a release. “As the Canadian market continues to strengthen, we are seeing that companies are increasingly willing to pay higher rental rates in order to be in prestigious locations.”

Between sixth and seventh spot, a large gap in pricing occurs with rents dropping to the $35 range for the seventh spot from the $57 range in the sixth spot.