Supply and demand issues continue to make housing less affordable for home buyers in the Greater Toronto Area (GTA), and the Building Industry and Land Development Association (BILD) and Toronto Real Estate Board (TREB) say municipal and provincial government taxes and fees are exacerbating the problem. 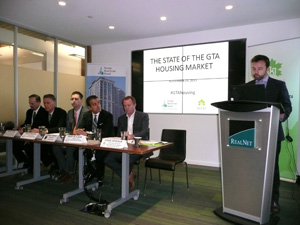 “Government policies at all levels have a major bearing on GTA housing,” BILD chair Steve Deveaux said at a media briefing held at RealNet Canada’s Toronto offices on Wednesday.

“Things like land use, housing and fiscal policy, government taxes, fees and charges, outdated zoning bylaws and approval processes, and a lack of land that’s serviced with infrastructure and ready for development are key factors in the challenge of affordability.”

There were 124,123 new and resale homes sold in the GTA through the first 10 months of 2015, with a record number of sales reported through TREB’s MLS system. The new housing stock is heavily slanted towards multi-family high-rise buildings at the expense of low-rise detached, semi-detached and townhouses.

“New homes are the flow that creates stock in the resale market,” said RealNet founder George Carras. “What you’re seeing in the flow is a structural shift in the kinds of housing that we are providing into the marketplace.”

Condos are being absorbed

“As these units come to bear on the marketplace, there are buyers waiting to buy them and these units are being absorbed quite quickly,” said Jason Mercer, TREB’s director of market analysis and service channels.

“Builders have to continuously be innovative in finding more efficient designs,” said Carras, who added people will need to become accustomed to living in smaller spaces as urban intensification increases and the GTA is projected to grow by 36,000 households and 100,000 people annually for the next 30 years.

BILD president and chief executive officer Bryan Tuckey cited an Ipsos Public Affairs survey of 1,500 GTA residents in August that revealed 70 per cent are concerned about their ability to afford to buy their next home.

“It has become increasingly challenging for us to design, build and sell homes that people — especially first-time home buyers — want and can afford,” he said. “Government fees and taxes amount to an average of 20 per cent of the cost of a new home in the GTA.”

Tuckey claimed development charges in the GTA have increased between 143 and 357 per cent since 2014 and said:

“It is unreasonable and unfair to put the cost of infrastructure, much of which will serve communities for 100 years, on the backs of new home owners. New home buyers should also not be responsible for paying for the longstanding infrastructure deficits of the provinces and local municipalities.”

TREB CEO John DiMichele is against the proposed spread of Toronto’s municipal land transfer tax to other parts of Ontario and cited a recent Altus Group study which showed each home sale through the Ontario MLS system results in an additional $55,000 in spending on housing-related goods and services, financial services and taxes paid to various levels of government.

If people can’t afford to buy houses, he said it will adversely affect businesses, jobs and the provincial economy.

Canada’s new Liberal government has pledged to bring in a new affordable national housing strategy and TREB chief government and public affairs officer Von Palmer thinks its Ontario and municipal counterparts would be wise to listen to the real estate industry and home buyers.

“The federal government has acknowledged that housing plays a critical role and we need to start removing some of the roadblocks and make it easier for people to afford to buy a house,” he said. “We’re not being ignored, but it’s a very slow process that we’re trying to turn around.”