Net zero buildings aren’t as complex or expensive as many believe and there’s no reason why more of them shouldn’t be built, according to panelists at the April 23 Green Real Estate Forum in Toronto. 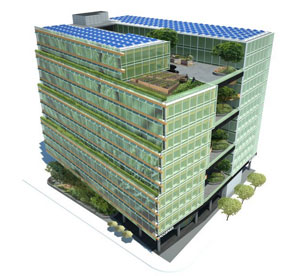 Flavien was joined on a panel by Albert Bicol, principal of Albert Bicol Consulting, who has helped build net zero buildings around the world, and Karl van Es, project leader and architect for the SUSTAINABLE.TO architecture and building science firm.

Bicol was formerly a partner at Cobalt Engineering/Integral Group, which had been involved in 26 net zero buildings before he branched out on his own two years ago. He emphasized the “keep it simple stupid” principle, which in this case is to follow the laws of nature and physics, should be applied more in sustainable architecture than it is.

“I think we’re heading in the wrong direction of throwing technology all over these buildings and trying to mask all the problems in the building with technology. I’m an engineer and I love technology, but buildings have worked for thousands of years. The trick is to make old technology sexier so that the developer can make lots of money.”

“We want to simplify the process and illustrate to people that the biggest savings in net zero buildings come before you add technology. It comes with good planning and good practice.”

The key passive building principles are orientation, insulation and air-tightness with ventilation in the floors, walls and roof.

Situating a building so that it maximizes winter sun and blocks out summer sun through shading optimizes solar heating and cools what you want to cool. Adding 25 per cent more insulation than what the building code requires — while initially more expensive — improves interior comfort and increases the air-tightness of the building, which reduces the need for more costly technology and mechanical services.

These concepts were applied to a four-storey wood construction apartment building project in Toronto’s Beaches neighbourhood (which won United States Department of Energy Race to Zero competitions for best design and integrated systems) and a mixed-use building in San Francisco in which van Es was involved. (The Living Zero – Net-Zero Energy Multi-Unit Mid-Rise in San Francisco is shown in the image above.)

“The projects in Toronto and San Francisco obviously have different requirements based on how much sun they get and how different their winter and summer climates are,” he said. “But once you know the principles, it’s just a matter of fine-tuning how they work together.”

The planning phase for the project lasted from 2005 to 2011, the concept came together in 2011 and 2012, construction took place from 2013 to the present ( landscaping is now been completed), and the post-construction phase of metering and controlling consumption to attain net zero status will continue to 2020.

It’s imperative everyone involved with such a project is working toward the same goal of making “livable, breathable, functional buildings” and to have a long-term vision when budgeting, according to Flavien.

“The developer, the client and the operator have to be flexible and open to innovation and be reactive. Innovation sometimes gets you out of your comfort zone and habits, and habits can be toxic. We’re trying to innovate and broaden minds.”

Net zero buildings are still a relatively new phenomenon, and there’s a false perception they’re more expensive to construct and operate. Bicol pointed out the net zero daycare he built for Simon Fraser University cost 20 per cent less than a traditional structure. Flavien said the new Varennes library is twice the size of the old one, but its operating costs are just one-quarter of what they formerly were.

With all of these positives in their favour, what’s holding net zero buildings back from becoming more mainstream?

“The biggest thing I find is financing and how to generate value on a building,” said Bicol.

Bicol emphasized there are too few investors around the world who will buy revenues from net zero buildings and that further education is needed to make the investment community more aware of all the advantages such structures have to offer.

“All finance people want is long-term revenues,” he concluded.