The Light House hotel and condominium project in St. John’s, N.L., signals the emergence of a burgeoning development company in the Atlantic province.

Republic Properties, which has quietly been assembling properties in and around the Newfoundland capital since 2009,  has now begun to build, starting with The Light House downtown.

The project includes a five-storey, 25-to-30 room boutique hotel on one side of Duckworth Street and a parking garage topped with three storeys of condominiums on the other.

The 17 condo units will range in size from 800 to 1,300 square feet and will be priced around $400 per square foot plus taxes.  The new buildings replace a former fire hall as well as a now-defunct strip club in the area.

The hotel’s design, a flat-iron building shape with the fuller end facing the harbour, provides the project’s name. All the suites should offer harbour views, according to Norman Turner, Republic’s vice-president of operations, who added: “From the harbour, it will look like a beacon of light.”

Republic has a number of other developments planned. An hour down the coast from St. John’s, in the small community of Brigus, the company is converting an old high school into a condo development of 30 units, starting at $160,000 each.

On Water Street in the city’s west end, the company intends to build a large mixed-use development that would include hotel and long-stay suites, rental units, retail, restaurant and coffee shops.

“We’re aiming that at the millennial market because there’s nothing really there for affluent 30-somethings who are not settled down with kids yet,” Turner said. That project likely wouldn’t start until 2015. 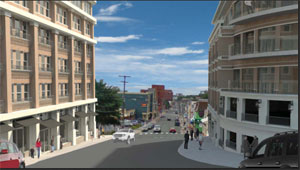 The two principals in Republic are Jeff Reardon and Neal De Florio. Reardon is the son of prominent St. John’s businessman Gary Reardon, who owns Reardon Construction and Development, where Jeff worked and which has built a number of sub-divisions and condos in the city.

De Florio recently moved from Toronto and has a background in property development and raising capital for projects.

St. John’s development prospects are interesting, to say the least. On the one hand, the city is booming, beneficiary of some $20 billion in mega-projects, most of them energy- or oil patch-related. The city’s recent prosperity has pushed the average house price up to the $400,000 range.

“The economy is not slowing any time soon,” Turner said.

That strong economy means plenty of opportunity for development. Turner says the market for “plain vanilla boxes” is starting to become oversupplied, opening up room for other, unique developments.

“At Republic, what we’re trying to build is something visually stunning and that will stand the test of time,” Turner said.

That’s easier said than done. As with many East Coast cities with a prominent heritage, development can be tricky, requiring amendments before city council and careful negotiation of local planning requirements.

Turner points out the planning process for the Light House project added up to two years. Like Halifax, St. John’s has height restrictions to protect view planes and maintain scale relative to nearby heritage buildings.

Republic managed to receive a variation from city council, allowing the Light House to reach 21 metres in height rather than the accepted 15. That’s largely because a couple of condo buildings and the Hotel Newfoundland in the immediate area had already surpassed the height restrictions.

The developer also received a site variance as the Light House project will change the nature of the street. CBC News reported one city councillor complained the sale of the former fire station to Republic didn’t go through a tender process and that the sale price of $740,000 was unrealistic on the current market.

She also told CBC: “It’s not an issue about the developer themselves because they do great work in the community.”

Some residents also complained about the height of the new development compared to the surrounding buildings.

“It will change that end of downtown a bit, but very much for the better,” Turner acknowledged. “They’re both standout buildings. They both make an architectural statement and you’ll have no doubt that they’re there when you’re driving down that end of town.

“What we’re replacing is the 1960s replacement for the original fire hall, a green concrete box. It’s hideous. And an old strip club. The town isn’t really losing much in the way of architectural heritage. In fact, they’re probably net winners on this one.”

Turner said the next step with some of their large developments might be to reverse them into an open-ended investment fund, which no one east of Halifax is really doing. Turner envisions private investors at the beginning, but says once the pension funds realize how prosperous the province has become, they may see investing as a good, diversified strategy.