Ottawa, and in particular its downtown core, is entering a time of uncertain economic times, and a couple of the business improvement areas at the centre of the action have new leaders trying their best to work around the turbulence. 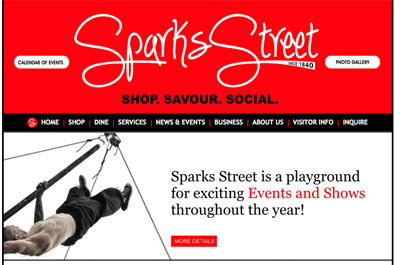 Les Gagne has been executive director of the Sparks Street Authority for a little over a year. His group represents businesses along the pedestrian-only portion of Sparks Street, one block south of the parliamentary district.

He describes the environment facing businesses as “challenging” due at least in part to about $1 billion worth of renovations in progress or in the planning stages, creating extended vacancies and repelling many would-be customers from taking strolls through the area.

“Obviously, construction is not a very good marketing strategy for selling your place,” Gagne said. “It certainly has created a lot of challenges to not only invite (customers) but to encourage and to keep our merchants doing well.”

Renovations to the Bank of Canada’s headquarters, occupying the block surrounded by Sparks, Bank and Wellington Streets, is the next big project Gagne is anticipating.

Then there’s the Bank Street BIA, representing business operators and building owners occupying most of Bank Street between the parliamentary district and Highway 417. Christine Leadman, a former city councillor who took over as  executive director in September, says the ongoing reduction of the federal public service hasn’t been the headache many might assume.

“The employment base here is not just government,” she said. “If you were to look at, say, Sparks Streets, where most of the buildings are federal buildings . . . ours is more mixed. There’s more private sector in the area — accounting firms, lawyers, that sort of thing. ”

Still, she added: “It’s hard for me to gauge it because I haven’t been here long enough to say, ‘Oh yeah, a year ago it would’ve been much busier.’ ”

Leadman added that Bank Street businesses benefit from a strong residential base, as new condominiums bring in a more plentiful and younger demographic that can sustain constant business activity.

Gagne, conversely, said businesses on Sparks Street are feeling the effects of reduced foot traffic as a result of the shrinking federal government. He’s also worried about the implications of anticipated relocations of government operations, such as when the Department of National Defence moves into the old Nortel Networks Corp. campus in Ottawa’s west end.

“I’m a firm believer that the government needs to spend more time, investment and commitment to making sure that their core is dynamic, strong and prospering,” he said. “I think we’ve had plenty of suburban sprawl to the point where I think it’s hurt the downtown core.”

Sparks Street consists mainly of low-rise buildings with many consumer-oriented businesses on the ground floors and offices of the upper floors.

Gagne estimated that about 40 per cent of the space within his jurisdiction is vacant. The federal government owns all of the buildings on the north side of Sparks Street and is not as quick as private-sector owners to fill vacancies, Gagne said.

“People have said to me, ‘Les, if the government sold all the buildings on the north side of Sparks Street, you’d see a completely different attitude about the downtown,’ ” he said. “Right now, a lot of that space is empty, and where’s the incentive to fill it? The taxpayer is paying for it whether it’s full or not.”

Leadman said there are just a handful of vacancies among the hundreds of retail spaces in her area. One real estate-related problem for her members is that many feel their properties are being assessed at inflated values, leading to higher property taxes.

“(For) property owners, the assessed values on their properties sometimes aren’t really justified,” she said. “In terms of the way the assessment works, if you have new condos coming into an area and new retail at grade, of course they’re raising the assessment in the area even though your building may not have changed at all. . . . I haven’t seen assessments going down in any of the areas.”

Both BIA leaders like the idea of turning downtown Ottawa into an eco-district, as proposed by local commercial real estate broker James McNeil as a way to attract multinational corporations who make sustainability a key part of their branding.

Gagne, however, fears a situation in which there is plenty of top-down enforcement of standards.

“When you start instituting these things, they sometimes lose the organic feel of what they’re intended to be,” he said. “I’d hate to see it become a bureaucratic approach. I’d love more of an organic or more of a ground-roots push.”

Leadman said there still is a lack of detail on just how an eco-district would be implemented.

“What is it going to do?” she said. “What (is the city) doing? What’s the long-term plan that the city has? . . . As much as this is something I think would be a good step, particularly in areas where the buildings are aged . . . seeing is believing.”