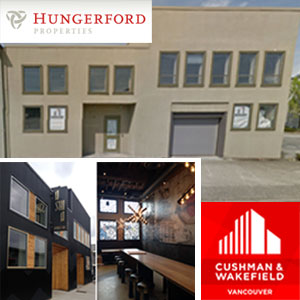 “With further growth and further movement from other municipalities coming into this neighbourhood, a lot of groups are wanting to be here,” said Cushman & Wakefield commercial leasing and sales vice-president Matthew MacLean.

“We’ve seen a growing trend with office user groups as well as higher and better use of industrial that would incorporate some form of distribution and light manufacturing with an ancillary retail concept, which has become very important for the neighbourhood as it creates amenities within this zone.”

Mount Pleasant stretches from Cambie Street to Clark Drive and from Great Northern Way and 2nd Avenue to 16th Avenue and Kingsway.

The previously working-class neighbourhood has undergone gentrification over the past 20 years, including the addition of housing that acted as the athletes’ village for the 2010 Winter Olympics and The Canada Line, an extension of the SkyTrain service that transports passengers from downtown Vancouver to Vancouver International Airport.

The vicinity around Q Shi Q at 159 W. 4th Ave. has undergone a metamorphosis since zoning changes were introduced three years ago to open the industrial area to more office and retail uses.

“The city is adamant that the only growth you’ll see is on the commercial side to encourage a higher tax base for some higher and better uses,” said MacLean. “You’re surrounded by residential on Broadway, Main, Cambie and on the north side of 2nd Avenue.”

Q Shi Q, a 30-seat Japanese barbecue restaurant and sake bar, is in a 68-year-old building recently used as a testing facility for Mountain Equipment Co-op (MEC). Hungerford Properties manages the former warehouse, which has a renovated interior and an exterior façade of corrugated steel in a herringbone pattern.

The back of the building includes a facility to produce all of the food for the restaurant and other sites. There is also office space, said Hungerford partner Michael Hungerford, whose company has managed the building for an unnamed owner since 2007.

Terra Breads was the first to combine retail and manufacturing in the area. The Juice Truck followed and now coffee roasters and craft breweries with retail showcases fronting manufacturing and distribution spaces have moved in to add life to the streets.

“They’re unique groups that typically have hip and edgy products and are offering an amenity that’s never been in this neighbourhood,” said MacLean. “It’s surrounded the neighbourhood, but has never been there.”

Next door to Q Shi Q, another Hungerford building also previously used by MEC will soon be home to Double Negative, a major producer of visual effects for the film industry expected to bring up to 300 new employees to the neighbourhood.

The structure is undergoing extensive renovations to accommodate the company’s imaging and editing infrastructure and extensive power requirements.

“That building was already in great shape and move-in-ready,” said MacLean. “They’re making a big investment in that market, as are groups like DHX (Media Ltd.) and Hootsuite, which has been there as a flag-bearer for the last five or six years.”

The existing building facade at the corner of East 5th Avenue and Ontario Street will be retained and incorporated into the overall building design. The property will be comprised of 9,000 square feet of retail space at grade and four levels of office space.

It will likely break ground in the new year once final permits are obtained.

“They’re building it on spec,” said MacLean. “They have no pre-lease commitments, but they’re confident in the neighbourhood and the way that it’s transitioning and emerging.”

MacLean said businesses started giving this part of Mount Pleasant more consideration once the more relaxed zoning regulations came into effect because rents were about 50 per cent lower than in the downtown core. Net rents and taxes have since increased, but it’s still a value proposition.

“I think the city should look at encouraging more of this type of growth so ancillary retail gets augmented a little bit, as it’s changing the nature of the area and adding a breath of fresh air to some of these older buildings as well as new buildings,” MacLean said.