For all the doomsayers pointing to construction cranes in downtown Toronto as signs of an impending office Armageddon, Ross Moore has a quick answer: new and old space will get filled. 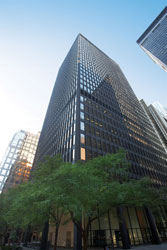 Moore, CBRE Ltd.’s Vancouver-based director of research, brings more than a laid-back west coast perspective to the country’s hottest office market. He takes a more historical approach to his forecast for the city which is in the process of adding about 5 million square feet of office to a downtown base of about 50 million sq. ft..

He’s confident that those new towers will fill quickly because much of the space is already pre-leased, business fundamentals are improving and the current building boom is in fact overdue given the fact that little new construction has happened in Toronto since the early Nineties downturn.

As for what all those glistening next-generation towers will mean for existing office space, Moore sees a lengthy cycle of investment and improvement coming.

“The pressure is on, absolutely, the buildings are forcing everybody to up their game,” he said. “The key trend is landlords are being forced to upgrade their space. The status quo is not an option and I think that LEED is now well-established.”

He points to the venerable but revamped TD Centre (shown in image) as the best example of that trend. Cadillac Fairview invested at least $10-million in upgrading the 4-million sq. ft. complex and has achieve LEED Gold EB for its signature black towers. Not bad for a development that got its start in the early 1960s.

The CBRE researcher does expect a rising vacancy rate for Toronto “certainly in the short term. It is difficult to absorb 5 million sq. ft. in a market of 50 million coming on in a relatively short time period. So we are going to see a rise in vacancy rates but nothing that I think is going to change the dynamics drastically.”

CBRE reports that the Canadian office market “is exhibiting signs of life after a prolonged period of lackluster leasing activity” as part of its second quarter National Office and Industrial Statistical Summary. It has found that more office space was absorbed in the past three months than any time in the past two years.

In a market currently defined by “a flight to quality and emphasis on workplace efficiency” CBRE is focused on improving business sentiment and its long-term positive effect on demand for office space. In that respect, an improving U.S. economy, a steady Canadian economy and high oil prices are all good omens.

CBRE reported that overall national office vacancy rate rose 10 basis points to 10.4% in the second quarter of 2014, the eighth consecutive quarter in which the national vacancy rate has risen thought it is rising “much more slowly.” The upward blip comes as 2 million sq. ft. of new office space came online.

Much of that new space was leased in advance and tenants were also leasing space in existing office buildings, which resulted in a total 1.6 million sq. ft. of office space coming off the market this quarter. New supply also helped to bolster the average asking net rental rate, which climbed $0.43 per sq. ft. in the quarter to an average of $21.63 per sq. ft. nationally for Class A space.

The most active market was Calgary where the overall office vacancy rate fell 30 bps quarter-over-quarter to 10.6%.  Moore sees high (and rising) oil prices as a factor in Calgary’s continued strength. “If you ask me about tone, I would say the tone in Calgary is much, much better than it was six or nine months ago.”

“In Montreal we have had a number of big financial institutions choose the mid-town market, which is a bit of a hybrid market,” he said. “What I hear over and over again is it is all about transit. It has got to be on transit, especially when it comes to back office. If someone can take the subway and not have to spend to buy a second car, and gas and insurance, that is an important hook. I think call centres are the same thing.”

The most active market was Calgary where the overall office vacancy rate fell 30 bps quarter-over-quarter to 10.6%. Calgary saw the delivery of 8th Avenue Place West, a new 841,000 sq. ft. building in the city’s core, which was fully leased upon completion. Energy sector tenants also committed to office space in the suburbs, causing the suburban vacancy rate to fall 230 bps to 11.7%. Calgary recorded 855,930 sq. ft. or 59.3% of national office space net absorption in the quarter.

Most importantly for Calgary, existing tenants cancelled sublets causing the amount of sublet space to drop for the first time since the second quarter of 2013 to 33.9% of vacant space. Moore said the widespread strength for existing office space could be an indication of a comeback but is more likely a result of pent-up demand as “a number of businesses that could simply no longer delay committing to office leases.”

While office demand increased this quarter, the 10% vacancy rate threshold has been crossed in all suburban office markets with the exception of Ottawa, which is getting closer to that mark with a 9.4% vacancy rate in the suburbs. Ottawa is an interesting and unpredictable market given the federal government’s pledge to reduce its occupancy. “It’s a moving target,” he said. “We are obviously aware of the moves by the Department of National Defence and how the old Nortel campus is going to affect things. Just based on our conversations with our Ottawa guys I would say the tone is better in the last three to six weeks but I think that the trend is still towards a softer market. Certainly by historic measures it is one of the highest vacancy rates I have seen.”

“I’m most bullish on Edmonton. More on the industrial side, but I think that has to spill over in office. We have got two or three office towers going up in downtown Edmonton which is really something.”

Read next week’s of Property Biz Canada for the CBRE report on Canadian industrial real estate markets for the first half of 2014.