Plaza Retail REIT (PLZ.UN-T) continues to add to its development and redevelopment pipeline while also selling off properties obtained through the $119-million acquisition of KEYreit in 2013. 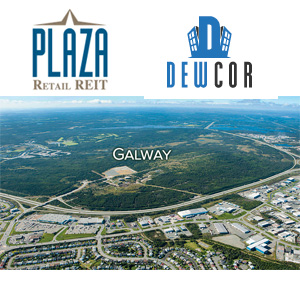 “We’re buying properties to redevelop or land to develop. We had a selling program with our KEYreit assets, which is basically behind us. We selectively sell some small properties here and there because it’s the right thing to do from our business strategy perspective.”

Plaza’s largest new project is a 50-50 joint venture in St. John’s, N.L., with DewCor, a company owned and operated by former Newfoundland and Labrador premier Danny Williams. The Galway master-planned community consists of a 2,400-acre development that will include retail, industrial/office, residential and golf course components.

Plaza will develop The Shoppes at Galway, the retail portion of the community that will be situated on more than 100 acres of land in the west end of St. John’s at the corner of Pitts Memorial Highway and Ruth Avenue. It will be comprised of more than 700,000 square feet of shopping space once completed.

The Shoppes at Galway will be built in several phases, with construction of the initial portion expected to begin in late 2016. The first phase is expected to consist of approximately 300,000 square feet of retail space.

“If you look at the shopping centre layout in St. John’s, you have a power centre near the airport in the east end of the market, so this is in the west end of the market where you’re seeing the real population growth,” said Zakuta.

“We’re very excited about it. There are a lot of homes coming in here, there’s some industrial and we’re doing our retail project. We’re seeing strong interest.”

Plaza sold income-producing properties and land from the former KEYreit portfolio in the first half of 2015 in: Drayton Valley, Alta.; Brandon and Selkirk, Man.; Windsor, N.S.; Oshawa and Whitby, Ont.; and Mont-Laurier, Que. The gross proceeds were $3.8 million, and total sales of former KEYreit properties now amount to $64.1 million, approximately $15.2 million more than the REIT had underwritten the assets.

Zakuta says Plaza isn’t looking to acquire any other smaller REITs at the moment, but will take advantage of opportunities and pursue them as they arise.

The majority of Plaza’s properties are located in Atlantic Canada, which Zakuta calls “a very stable market without a lot of ups and downs” that has good potential for further growth.

“People are coming from the smaller towns and villages and moving into the cities. That creates some opportunities for people like ourselves.”

Plaza will invest approximately $18.2 million for its share of these new projects and expects to add approximately 101,300 square feet to its portfolio. Four of the projects — one in Ontario, two in Quebec and one in Newfoundland — are being developed with joint venture partners.

According to the Plaza website, projects under development include:

Plaza has an agreement to purchase land at Millridge and University avenues in Saint John for $750,000. It will be developed in phases, beginning with a 12,000-square-foot retail outlet, and could be expanded to include two other buildings encompassing about 15,000 square feet between them. The deal is subject to zoning approval.