Toronto-based Allied Properties REIT (AP.UN-T) just capped off a strong 2013 financial year and is not afraid to tell investors even better times are ahead. 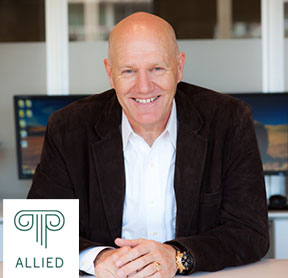 That positive message came out in a recent conference call Allied had with investors and analysts and the theme was picked up in an interview by the REIT’s president and CEO, Michael Emory (shown in image from the company website).

“It was a great year, a great quarter, and maybe even more importantly, we felt that we set a very good foundation for a very good year in 2014 and 2015,” Emory said, “to the extent that you can predict the future.”

After rates spiked and REITs stalled in May, the market for properties Allied is interested in have slowly and steadily recovered, meaning acquisition opportunities may be more abundant in the near term than initially expected.

Last year’s market retreat “led us to the preliminary conclusion that acquisitions may slow down. Not because we didn’t have a very favourable cost of equity and cost of debt, even after this event, but because we felt the vendors would lose some momentum and some readiness to sell,” Emory said.

“We did feel it in the second half of the year; there were fewer opportunities that fit squarely within our investment and operating focus.”

Out with a bang

Near the end of 2013, that changed and those would-be acquisitions started to appear again, said Emory. “That led us to guide the market to a higher level of acquisitions in 2014 than we had initially expected.”

“The acquisitions will be more evenly spread across the country. Last year, our acquisitions were very heavily weighted within Western Canada which was great.

While most in the commercial real estate business think of Allied as an operator of loft-style office properties, the REIT has a handy three-part classification for its properties it has stuck to since going public in 2003 with $120 million in assets compared to $3.5 billion in assets today. They are distinctive, located either in or close to the city core and offer lower occupancy costs to tenants than traditional towers.

“It is really those three attributes in combination that characterize every one of the 140 buildings we currently own to a greater or lesser degree,” Emory said.

That focus on one-of-a-kind buildings means Allied is buying in a “less commoditized market” which Emory said translates into chances for higher yields than traditional office properties.

The negative side of that equation is that the REIT is forced to make small acquisitions with its average deal size around $20 million.

“We’re very accustomed to acquiring the way we do and we actually like it. We are a consolidator in effect and being able to consolidate this fragmented market we think has huge opportunity for us and our unit-holders.”

Today, Allied sits on a portfolio with plenty of unrealized potential, specifically properties that often don’t use all the land that could be built given the current zoning codes. “We have the ability to add rentable area to our existing properties in very large amounts without having to bear any additional land cost,” Emory said.

Allied today has the scale required to carry out this more risky intensification strategy that it might not have pursued in the past. In its case, it has a 15% limit of gross book value that it can dedicate to development.

“When you are small, that amounts to very little. When you have got a balance sheet the size of ours, it amounts to hundreds and hundreds of millions in potential development without putting our core distribution in any kind of jeopardy.”

At the end of last year, Allied’s properties under development represented about four per cent of its portfolio book value. That percentage will rise in 2014 and 2015 but will stay well below that 15% limit.

It also has 11 intensification projects underway, two of which are properties under development and the remaining nine rental properties going through the municipal approval or pre-development process.

A stronger balance sheet has also allowed the REIT to buy properties that need more capital intensive renovations than it had in the past, Emory added.

Allied leased more than 1.5 million square feet of space in 2013, ending the year with its rental portfolio 91.9% leased, or 94.4% leased if upgrade properties are excluded. Allied renewed or replaced leases for 85.6% of the GLA that matured in 2013, resulting in an overall increase of 8.9% in net rental income per square foot from the affected space.

At the end of the year, the fair value of its assets was $3.4 billion, up 16% from the prior year, through a combination of acquisitions ($182 million) and value appreciation ($285 million), offset a bit by dispositions ($7 million).

Allied’s total debt was 36% of fair value and comprised entirely of first mortgages with a weighted average term of six years and a weighted average interest rate of 4.8%. Its immediate liquidity was $133 million and it had approximately $400 million in unencumbered properties.