New statistics on the Greater Toronto Area (GTA) office market painted a sobering picture of a climbing vacancy rate and an increase in overall availability of space. Both metrics are at a three-year high, according to the Third Quarter 2013 Greater Toronto Area Office Market Report  from Avison Young.

The report said the market’s softness was clearly evident in downtown Toronto.

A burgeoning sublet market is also raising concerns, having jumped 30 per cent in the past year to 3.7 million square feet, according to the report. 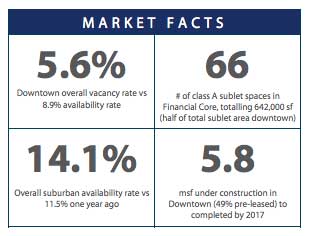 “It appears 2013 may turn out to be one of the least impressive performances in some time,” Bill Argeropoulos, vice-president and  director of research for Avison Young (Canada), said in a statement.

“Notwithstanding these results, corporate Canada remains intact with ample cash on hand to expand some of its operations, while the development community is obviously looking beyond the current malaise and proceeding with some degree of confidence,” Argeropoulos said.

The report said that the overall vacancy rate (unoccupied space) climbed to 8.8 per cent in the GTA, up 20 basis points from the previous quarter. Overall availability (which includes space being marketed for lease) was significantly higher at 11.4 per cent, jumping 90 basis points between quarters.

The spaces for sublet are available in a range of sizes, from spaces less than 1,000 sq. ft. to multi-floor opportunities in excess of 90,000 sq. ft. The subleases also encompass a diverse spread of industries, including banks and financial services, legal and professional service firms, the natural resources sector and the high technology industry.

Argeropoulos pointed out subleases could be obtained in a variety of buildings from those recently constructed or renovated to more established towers. He said those types of opportunities cater to start-ups “and other price-sensitive organizations looking for well-located premises in what would otherwise be unaffordable buildings.”

Argeropoulos noted that Toronto is not the only city dealing with subleasing. He said corporate downsizing, consolidation and relocations have fuelled the phenomena across Canada. In downtown Calgary, for instance, nearly 50 per cent of the total available space is on the sublet market.

Despite the setback in the GTA office market, new developments continue apace. In particular, the Globe and Mail announced a new office tower downtown that will have 500,000 sq. ft. over 17 stories and be certified LEED Gold. Developer First Gulf will move to the tower as well, bringing pre-lease occupancy up to 40 per cent.

As well, The Remington Group is expected to announce a 350,000-square-foot build-to-suit tower in Toronto East, the first large-scale office development in nearly a decade in the area.