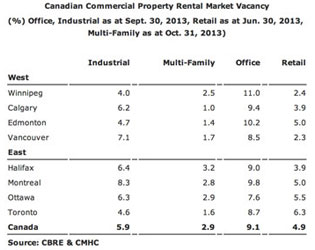 That’s the prediction found in the 2014 Canadian Economic Outlook and Fundamentals released last week by Morguard Investments. The real estate company is the latest to weigh in on market trends for 2014.

The rental market vacancy figures, a centrepiece chart of the Morguard report, tells a tale of continuing low-to-moderate vacancy rates in the industrial, multi-family and retails sectors.

The office sector, where Morguard predicts a mixed performance in 2014, is cited as the exception to what is otherwise a stable industry.

“The outlook for the office sector is likely to include a measure of unevenness. On the one hand, economic strengthening should boost private sector demand. On the other hand, the introduction of new supply in several cities will at least partially offset market progression.

“Despite the near-term unevenness, investors will continue to view the sector favourably, given its positive performance history. However, results will be mixed, as a number of demand and supply trends unfold,” the report says.

Morguard forecasts that with the completion of several new towers in the country’s major markets over the next three to five years, development risk will increase sharply.

Even so, the real estate firm noted that fundamentally Canada’s office space metrics in 2013 were solid despite a softening in demand. Midway through 2013, the national occupancy rate stood at 91.3 per cent. More than 22 million square feet of office space is expected to come on to the market in the next two to three years.

The report notes that a “marked reduction in demand” took place in due to uncertainty surrounding the global economic recovery, through public-sector fiscal restraint and space rationalization, and lower-than-expected oil and gas activity. The latter produced an upward vacancy trend in Calgary, the report noted, along with an increase in available sublease space.

“However, despite the overall reduction in demand for space, market fundamentals held up relatively well,” according to Morguard’s report.

In the West, Morguard cautions that it expects demand won’t meet the new supply of office space coming onto the market, particularly in Winnipeg and Calgary.  A strong local economy in the commodities sector could trigger a healthy appetite for space in Calgary in 2014.

Construction south of Toronto’s downtown core will result in vacancies in the financial heart of the city, the report says, as tenants relocate to this new cluster of space. But for the “most part,” vacancy rates are forecast to remain healthy overall.

One notable bright spot is Halifax, where the GDP is expected to increase by 2.6 per cent in 2014. The economic growth will spur demand for office space, resulting in occupancy of at least part of the 500,000 square feet being developed in the city over the next five years.