A year after REALpac identified the really big number the commercial real estate sector generates for the Canadian economy ($63.3 billion), the industry association has zeroed in on the contribution the office sector makes. 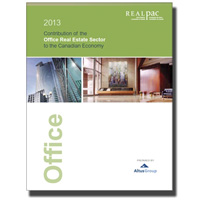 As you might expect, it too is an exercise in really big numbers.

The report examined the financial benefits from the office component of the the commercial real estate sector in construction and investment in office buildings and the ongoing operation of these buildings in 2013.  Taken together, in that year, the office sector produced $20.8 billion in annual economic activity in Canada.

That is comprised of capital investment in the office real estate sector of $7.7 billion, ($4.5 billion spent on new buildings and $3.2 billion invested in capital improvements), renovations and the upgrading of existing buildings.

REALpac’s just-released Contribution of the Office Real Estate Sector to the Canadian Economy report, produced by Altus Group, also breaks down that $20.8 billion contribution in various other ways it no doubt hopes policy makers will take into account.

“Now that REALpac has quantified the economic impact of the office sector to the Canadian economy, the association can provide policy makers at the federal and provincial levels of government, as well as municipal planners and politicians, with credible data to enable smarter decisions and an improved perspective on the sector,” said REALpac chief executive officer Michael Brooks.

“In addition, owners, managers, tenants and investors, and the multitude of companies in Canada within this important sector will be better able to see how their businesses and decisions affect the office sector and how they are interconnected to GDP and employment.”

According to REALpac, the office sector:
• Supports 111,600 jobs each year, many of which are high-paying professional positions;
• Generates $6.9 billion in income, related to personal income and other sources of income;
• Generates $4.4 billion in corporate profits earned by many small- and medium-sized companies, and some of the largest companies in Canada, such as pension funds and insurance companies;
• Contributes $2.5 billion in personal and corporate income tax revenues for the federal and provincial governments;
• Contributes substantial revenue to municipalities and school boards across Canada through realty taxes.

Capital investment in the office real estate sector declined to its lowest level during the 2009-13 period in 2010, mainly due to weakness in spending on improvements to existing buildings.

New construction investment has been around $4.0 billion each year over the period, except in 2013, when $4.5 billion was invested, pushing the total capital investment in office buildings to a high of $7.7 billion.

By region, Ontario accounted for the largest share of capital investment in office building in the country, totalling more than $3.1 billion in 2013, representing some 40.8 per cent of Canada’s total, followed by Alberta (23.8%) and Quebec (17.7%). Atlantic Canada had the smallest share of total investment in the office real estate sector in Canada, accounting for 3.4%.

Taxes and other numbers

Perhaps not surprisingly, construction spending on new buildings in the office real estate sector and the ongoing operation of these buildings play a significant role in regional economies across Canada contributes the most in Ontario. Last year, the office sector contributed $4.8 billion to the province’s and Canada’s GDP, followed by Alberta ($2.3 billion) and Quebec ($1.9 billion).

On the flipside, the office sector generates millions of dollars in revenues for governments in the form of corporate taxes. What follows are estimates based on assessing corporate taxes based on the province where buildings are located.

Actual corporate taxes paid may differ from these Altus/REALpac estimates due to differences in reporting jurisdictions for the office real estate sector companies.