Zoning amendments to Vancouver’s Mount Pleasant area put in place in 2013 have resulted in a real estate boom and a dramatic transformation of one of the city’s last industrial nodes. 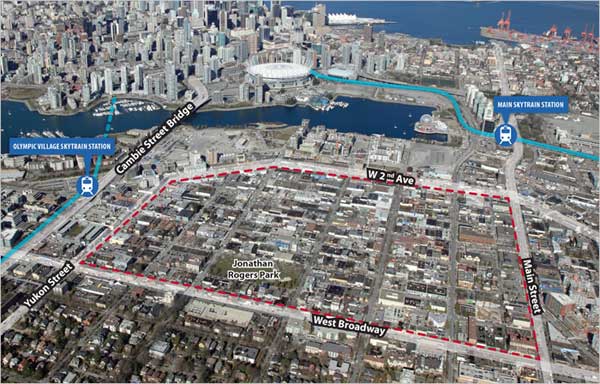 Industrial real estate deals in Vancouver hit a record $140 million in 2014, up from $100 million the previous year as fewer, bigger deals were made, a report from Avison Young found.

The deal surge is attributed to new zoning regulations put in place by the West Coast city which have opened up industrial property for office use.

“Current rents cannot match what you would be able to earn when you build a new facility,” said Struan Saddler, an Avison Young vice-president who specializes in industrial leasing and sales transactions.

The amendments to the I-1 zoning kept the density at 3.0 FSR (floor space ratio) while allowing for a greater variety of office uses. A mixed-use building can now comprise 1.0 FSR of light industrial/service space on the ground floor and 2.0 FSR of general office space above.

(Mount Pleasant is outlined in red in the photo.)

What Vancouver has done with its revamped zoning is to allow developers to construct a new mixed-use building an industrial area as long as they retain an industrial component.

“You technically need to retain some sort of quasi-industrial podium for your eventual office building,” he explained. “The ground floor needs to be some sort of hybrid” of industrial and office.

Working within a 60-foot height limit, developers are building office on the second to fifth floors or “whatever you can fit in under the height limit.”

Who is active in the suddenly hot market?

“One of the main buyers is wholesalers and light manufacturers who can use a significant portion of the ground floor for retail or a showroom to sell their products directly to the public,” Saddler said. “You can get a group that would be willing to pay close to full retail rates on the ground floor and then you are inheriting office rates.”

“This pro formas nicely if you can get those rates. But the issue is land is creeping up so much that it is almost getting a bit carried away . . . groups are falling over themselves to get into the game here, obviously a little bit late to the party – but maybe they have an idea in mind, a tenant in tow.  It is really a unique market right now specifically in Mount Pleasant.”

Saddler predicts that as land prices continue to rise with the blurring from industrial to office, property taxes will follow. Already, the math that makes the Mount Pleasant a deal compared with downtown locations is getting more challenging, he said.

“We are reaching the brink of where it doesn’t makes financial sense anymore for a new building unless you are an owner-user and you just really want to be there and are willing to pay whatever because it just doesn’t matter as far as the economics of the deal.”

Saddler expects the Mount Pleasant experiment will be utilized in other areas of the city to allow for more development and to grow the tax base.

“It will likely not happen overnight,” he said.

“I don’t see that happening immediately in other areas in the city core, but I think that it is an absolute necessity for them to roll with the growth of the city . . .  so down by the port. It has already happened in Railtown and Gastown.”

Unlike many other industrial areas, the buildings in those parts of the city are neither historic (many date to the 1960s) nor particularly appealing for retrofit with low ceilings.

“A lot of those buildings will be knocked down, unless they have inherent historic value.  Some of them do and the façade will be maintained, but the majority are unfortunately inefficient and will be knocked down to use the full three (floor space ratio) and go underground for parking.”

Saddler expects new buildings constructed under the zoning amendments in industrial areas such as Railtown and Gastown will be attractive to tenants.

“The factor that is attracting some of these tenants to the zone is the discrepancy between operating costs and taxes from say a downtown or central business location – which can be upwards of $20 a square foot,” said Saddler.

“You are going to see more speculative, purpose-built and strata office developments in those industrial areas that now permit such uses. There will be a larger percentage of true office construction in order to achieve the higher lease rates, and strata sale pricing that coincides with the recent increase in Vancouver’s industrial land prices.”