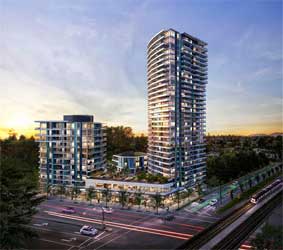 Marine Gateway, a mixed-use development of 900,000 square feet, is the single largest development currently underway in Vancouver.  The condo component of Marine Gateway and the Intracorp development sold out within days of going on sale.

Onni purchased the Northwest site with planning approvals in place from the Wesgroup Properties in June for an undisclosed sum.

“We’re pretty much in the best location in the whole South Cambie Village,” enthuses Nick Belmar, Onni’s vice-president of sales. The two towers will have unobstructed views of Vancouver’s entire west side, the North Shore mountains, the Fraser River and glimpses of the Pacific Ocean.

Cambie Village is located in the western section of the City of Vancouver. City Hall is also there and it lies 2.8 kilometres from downtown. There is a vibrant retail area along Cambie Street with a mix of newer and heritage buildings.  It is known for its artsy, community feel and proximity to health care services.

All three building projects are located adjacent to the Marine Drive station on the Canada Line, a light rail transit line originally built for the Vancouver 2010 Winter Olympics. Belmar says Northwest residents will be able to step out their door, jump on a train and be in downtown Vancouver in 15 minutes. It’s a nine-minute ride to the airport.

“Train-themed development sites is the hot button out in Vancouver,” Belmar says. “It just connects everybody, so you don’t have to worry about your car, which is a huge selling factor.”

Belmar says the City of Vancouver and other nearby municipalities are pushing for development along the Canada Line. “They’ve adapted the idea of high-density developments around the core areas of transit, trying to promote a greener style of living.”

Northwest will feature 31- and 13-storey towers, along with approximately 10,000 square feet of retail space. Belmar says the retail will consist of “essential services” such as a bank and coffee shop. As Marine Gateway across the street will have 225,000 sq. ft. of retail, it doesn’t make much sense for Onni to build much into their project.

Northwest’s condos will start at $269,900 for a 440-square-foot one-bedroom unit. Belmar insists they’re not micro-condos, however. “What you’re seeing now in Vancouver is very efficient floor plans, smart space planning, no wasted space,” he says.

“They’re traditional one-bedroom homes that are just very efficient. When you take away hallways or little wasted areas as you transition from the kitchen into the living room, you’ll be surprised how much you can actually get out of these.”

The buildings are being constructed to LEED Gold standard and will include a heat recovery system that draws fresh air from outside and then filters and distributes it through the home. Other green features include commercial-grade laminate flooring, LEED-certified paint and even an outdoor, common area for gardeners.

Belmar expects people from the nearby Marpole area will purchase units, as well as individuals downsizing, investors and first-time home-buyers.

Adjacent to Northwest, Marine Gateway will feature towers of 29 and 31 storeys, respectively. Combined, the two buildings will hold 415 condos.

Six floors of retail will become the area’s major shopping hub and will include an 11-theatre Cineplex, a Starbucks, an Osaka Supermarket, an A&W, a Subway, three banks, a liquor store, an Irish pub and more.

Marine Gateway will also include 14 stories and nearly 250,000 sq. ft. of LEED Gold- certified, class-A office space. Some 2,000 people will work in the building with occupancy scheduled for the summer of 2015.

Intracorp’s MC2 will feature a 26-storey and a 33 storey-tower with a combined 443 condos. The building will include, among other things, public art created by Douglas Coupland, the author of Generation X: Tales for an Accelerated Culture and Microserfs.

The building will be designed to meet LEED Gold energy equivalency, and will include high-efficiency plumbing, high-efficiency lighting, Energy Star appliances, and a green podium roof in the north tower.

The Onni Group is a fully integrated real estate development company that has built more than 6,000 homes during the last decade.  The company owns and manages five million square feet of commercial property and more than 4,600 rental apartment units. It has offices in Vancouver, Toronto, Chicago, Los Angeles, Phoenix and Mexico.