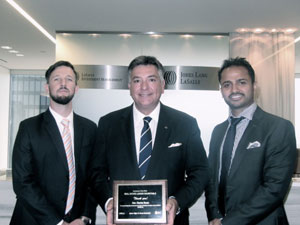 “The association has been formed as a networking and professional development platform that we hope will be the voice of the commercial real estate lender industry,” said Amar Nijjar, vice-president of debt capital markets at JLL, which provides financing solutions and advisory work to clients across Canada and has placed more than $1 billion of debt business in its first 12 months of operation.

CRELA will host quarterly themed luncheons attended by lenders from different facets of the industry, with sessions providing advice from legal, environmental, engineering and real estate experts. Other networking and social events will also be planned as the association gains a firmer foothold.

In an effort to give the launch some heft, CRELA invited Sousa to address the audience a day after he announced that Ontario reduced its deficit to $10.5 billion last year — $800 million lower than he forecast in his May budget that brought about a June 12 election and resulted in the Liberal party increasing its seats by 10 and forming a majority government.

The Ontario Ministry of Finance is responsible for regulating the commercial mortgage origination, servicer and lender industry. Sousa applauded CRELA’s establishment and said his department wants to have more input from stakeholders as it reviews Financial Services Commission of Ontario mandates and possible policy changes.

“I’m keen on looking to maximize the potential of your organization and the things that you do so that you can deliver your services more effectively and export some of that expertise around the world to locations that I know are looking for what we offer here in Ontario,” said Sousa, who added he’s trying to take the politics out of government.

“I look forward to doing more and being proactive in the things we’re doing, and I welcome your input. I congratulate you on this launch and putting together this networking opportunity.

“These groups and discussions help me, too. And I will use your minds and expertise in order to do what we need to do. Having a forum like this can go a long way, and having your input on policy and legislation will help.”

The Mississauga South MPP is also the vice-chair of the treasury board and management board of cabinet and previously served as minister of citizenship and immigration, minister responsible for the Toronto 2015 Pan and Para Pan American Games and minister of labour. He’s certainly familiar with lending as his pre-government careers included working at the Royal Bank of Canada Financial Group for more than 20 years and, prior to that, owning and operating a financing company serving small businesses.

Sousa noted that despite some adverse economic conditions, the province’s rating remained unchanged, at AA– for long-term debt and A-1+ for short-term credit, as a result of controlling government spending. He pointed out that Ontario has the lowest per capita program spending among all Canadian provinces.

The 55-year-old politician reiterated the province’s commitment to eliminating its deficit by 2017-18 and said it will continue to invest in such programs and services as health care, education, infrastructure and job creation while managing spending growth by ensuring government activities are carried out efficiently.

A continuing focus will be broadening the base of the economy in such sectors as aerospace, agri-food processing, biotechnology, information and communications technology and mining in order to be more competitive and weather economic downturns.

Sousa cited the 10-year, $2.5-billion Jobs and Prosperity Fund created to partner with businesses to encourage new investment that creates jobs in Ontario, and said there was between $8 billion and $10 billion in direct foreign investment in the province last year.

The Liberals are committed to moving forward, while working in conjunction with the federal government and aboriginal communities, with the planned “Ring of Fire” chromite mining and smelting development project in Northern Ontario. Sousa included $1 billion in the provincial budget for the construction of an all-weather road to provide direct access into the massive but remote region in the James Bay lowlands.

Another priority is to establish a high-speed rail line from Windsor to Quebec City using the expertise of Ontario companies.

Sousa said billions of dollars have been invested in hydro transmission systems and “improving the integrity of the grid” since the August 2003 blackout left 10 million Ontarians in darkness. Converting coal-fired thermal power stations to biomass, oil and natural gas has helped reduce pollution, and improvements are being made to nuclear, hydroelectric, wind and solar sources of electricity while the government prepares to remove the controversial debt retirement charge from hydro bills on Jan. 1, 2016.

Sousa admitted that Ontario’s unemployment rate of 7.4 per cent is still higher than he’d like and he wants to see improvement in an economy that’s been growing by less than two per cent in real terms in recent years, but was proud of Ontario’s net debt-to-gross domestic product standing at 38.6 per cent at the end of the 2013-14 fiscal year while the ratio in many European countries hovers around 100 per cent.