A cash-strapped Ontario Government intends to maximize the value of its crown corporations starting with a thorough asset review. On the block are some big ticket items such as the province’s shares in General Motors, dating back to the 2009 auto bailout, and its real estate holdings. 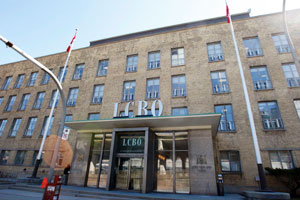 “We are going to determine what business the government should be owning and what it shouldn’t,” Charles Sousa, the Ontario Minister of Finance, said at a recent Economic Club of Canada luncheon in Toronto. “Continuing public ownership, however, remains a key priority.”

According to the Toronto Star, in his speech Sousa made a commitment to sell two prime government-owned real estate assets: the Queens Quay Toronto headquarters of the Liquor Control Board of Ontario; and the University Avenue offices of Ontario Power Generation (OPG).

“We are going to evaluate the best use of these assets as well as the maximum potential of the respective crown business. Proceeds will go into the Trillium Trust to pay for infrastructure projects across the province,” said Sousa.

An RFP for the Queens Quay LCBO headquarters is expected this summer while the timing of the sale of the Ontario Power Generation (OPG) building was not mentioned by Sousa. The province is considering  the sale of other properties throughout downtown Toronto as part of the asset review.  “The government’s priority is to invest in jobs . . . not real estate,”  Sousa said in his speech.

The sale of the Queens Quay property was first reported in 2012 when Dwight Duncan, then Minister of Finance, made the announcement at the Economic Club of Canada. At the time, he anticipated the province would receive as much as $200 million from the sale.

The Queens Quay LCBO headquarters is located at 55 Lake Shore Blvd E. in the Toronto Harbourfront. The property is adjacent to the area encompassing Waterfront Toronto’s development plan for the central waterfront across the street from Pier 27; near to the emerging south core financial district; and within walking distance of local attractions such as Sugar Beach  and Corus Quay.

The iconic Ontario Power Building was constructed in 1975 and has 19 floors of 113,898 square metres.  It is located at 700 University Ave., a major north-south corridor in Toronto’s downtown core which is home to major hospitals and landmark office buildings that serve as head office space for major financial and insurance firms. A boulevard features memorials, statues, gardens and fountains and leads to Queens Park circle that surrounds the Legislative Building. 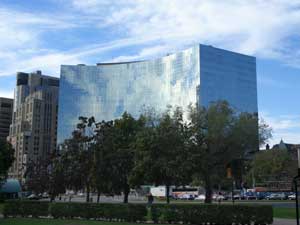 The way forward on assets is “pretty clear but doesn’t automatically mean a sale,” Sousa said. Some assets may no longer serve a public good and there are ways to improve efficiency and optimize financial performance of any company, including OPG, Hydro One and the LCBO, he said.

“We will not do what the previous PC government did . . . with the fire sale of Highway 407. That’s not the way our government will approach these decisions. We will weigh our options. We will take a balanced approach,” he added.  His comments are in reference to  the controversial sale of the 407 toll highway in 1999.

“In a rush to a balanced budget, they (the PC government under Mike Harris) sold an asset for a price significantly below its market value that did not protect taxpayers, nor consumers, nor businesses. . . . And we are now paying the consequences of that rushed decision. Let me be clear – we are not rushing,” Sousa said.

The unpaid council will consider options that will include corporate reorganization, acquisitions, mergers and public-private partnerships, according to a provincial news release. With reference to maintaining core assets, the advisory group is to “report to the premier about Hydro One, OPG, and the LCBO by the end of 2014.”

According to Infrastructure Ontario’s website, the sale process for any property within its portfolio involves it being “first circulated to other levels of government for consideration” under what is called a direct sale. Non-profit organizations who have applied with the Ontario Nonprofit Network are also included in this initial circulation.

Due diligence for provincial properties include market value appraisal, environmental site assessment, heritage studies, First Nations consultation and an Order in Council. “Subsequent to OIC approval, the public would then have the opportunity to purchase the property through an open, fair and transparent sales process.”

The asset plan to be delivered by the council will be part of the 2014-15 budget, expected to be unveiled soon.