Two commercial condominium projects in Ottawa are currently stalled due to a lack of demand.

Huntington Properties has had municipal approvals in place since early this year for two developments, The Mark (shown in image) and The Profile. The former is a two-building, two-storey complex in the west-end suburb of Kanata, close to much of the city’s high-tech industry. The other is a single, two-storey structure in the Ottawa Business Park, southeast of the downtown core. 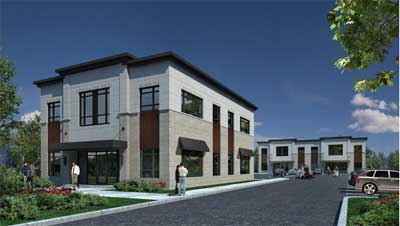 Craig Whitten, Huntington’s leasing manager, said shovels could hit the ground any time; it’s just a matter of hitting “a certain threshold of sales” in order to secure the financing for construction.

“We were expecting to build earlier in the year, but we haven’t had enough sales,” he said. “This year, in general, with commercial real estate and residential condo sales, it’s been quite slow. We think it’s been more of a blip than anything else. We still think (commercial condos) are attractive to a lot of small-business owners.”

The Mark has sold four of its 12 suites, while The Profile has had no sales, despite, as Whitten pointed out, market data suggesting east Ottawa is currently a stronger market for commercial real estate than Kanata.

“Right now, the Kanata market’s pretty soft, so you can get rental suites at a pretty low price,” he said. “If you use our price point, we’re at a (leasing) equivalent of about $13.50 a square foot. So because there’s a lot of vacancy and landlords want to fill up their buildings, they’ll go below market rate, say, in the single digits.”

“We have the flexibility if someone wants the footprint of four suites together,” he said. “We don’t have to put in the demising walls and we can adjust the interior layout to fit what they want to do.”

Whitten said he expects most potential customers for The Mark to have a connection to the high-tech industry, while buyers for The Profile will be more diverse.

Diving into the condo market

Huntington specializes in medium-scale commercial buildings. It manages everything it builds and has about 30 properties in the Ottawa area with about 700,000 square feet of space in all, Whitten said.

This, however, is its first crack at commercial condos.

“We see a lot of tenants that are interested in buying instead of just renting, so we saw that there could be an opportunity for building suites like this, this size, around 1,000 square feet,” Whitten said.

He said Huntington looked to offer something a little more “upscale” in comparison to what’s currently available for commercial condos in Ottawa.

“We’re at a higher price than maybe other commercial condominiums, but we’re building them out of steel and concrete, and brick exteriors,” he said. “It costs more to build so it costs more to buy, but we thought that would be more attractive to our target market.”

Springcress, another Ottawa developer involved in commercial condominiums, recently finished a project in the city’s southwest end named for its address, 460 West Hunt Club. It’s working on another development, not far from that location, called The Chambers of Prince of Wales.

David Spillenaar, president of Springcress, said he was somewhat surprised to hear that Huntington was having difficulty selling suites in its planned commercial condo developments.

“. . . although if you’re trying to market in the summertime, the market has been slow,” he said. “And overall the economy of Ottawa has not been what you would call robust. . . . Whenever a developer, whether it’s residential or commercial, goes to the market, there are a number of factors that go into a purchaser’s buying decision — pricing, location and design.”

Still, he said 460 West Hunt Club is sold out and there’s significant interest in The Chambers of Prince of Wales. Spillenaar said low interest rates and a desire among business owners to build equity have fuelled recent demand for commercial condominiums.

“With today’s interest rates, you can buy your space, and for the same amount of money that you’re paying for office rent, you can pay off your mortgage . . . and therefore you’re paying down principle and, at the same time, you’re building capital appreciation.”