Office vacancy rates are rising in Ottawa as slow growth in the high-tech sector trails the federal government’s downsizing and relocation program. 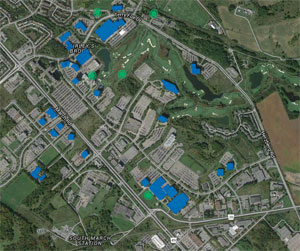 Office vacancy rates increased to 12.4 per cent from 10.6 per cent during the same quarter 12 months earlier, which has led to reduced rents.

“There are still large pockets of space available and there are some landlords at risk of losing larger tenancies through the federal government, so there’s still going to be some pretty aggressive deals being done in the marketplace for the next 12 months,” said Holmes.

“It’s an advantageous market for tenants, so if there’s an opportunity for tenants to do something with their lease at this point, they should probably consider it because this window of opportunity isn’t going to stay open forever.”

Downtown comprises 42.4 per cent of office space in the city and had a 9.9 per cent vacancy rate, up from 9.5 per cent a year earlier.

“As we get closer and closer to having light rail up and running, I think we’re going to see some interesting changes in where companies are locating and what type of companies are moving downtown or out to the suburbs,” said Holmes.

“Although condo sales have slowed, they’re still having a very significant impact on how companies are viewing the downtown core and deciding whether or not they want to locate there to be closer to where their employees are.”

Kanata is the main location for a large number of high-tech firms and despite its 14.4 per cent vacancy rate, organic growth by existing businesses and new companies coming in dropped the rate from 16.1 per cent in the second quarter of 2014.

The KRP Development Group‘s  $69-million acquisition of a seven-building, 411,000-square-foot office portfolio in December 2014 gave the real estate arm of the Terry Matthews business empire control of 50 per cent of Kanata’s total commercial market, according to The Tenants Advantage.

Darren Fleming, managing principal of Cresa Ottawa, suggests in the article that KRP’s influence on the Kanata office market will be to raise leasing rates and spur technology companies to consider downtown submarkets. (KRP buildings located in the Kanata technology park are shown in blue in the image above.)

One of the areas that might benefit from new technology tenants is the fringe core submarket — comprised of such neighbourhoods as the ByWard Market and the Glebe and largely featuring small, cost-conscious businesses — makes up 11 per cent of the city’s office space. It saw its quarter-over-quarter vacancy rate almost double from 5.7 to 10.7 per cent.

The east submarket, accounting for 9.3 per cent of Ottawa’s office space, continues to struggle to attract new tenants and has seen its vacancy rate balloon from 8.3 to 18.5 per cent.

The south/airport submarket houses 9.6 per cent of the city’s office space and has had a relatively stable vacancy rate in the seven to eight per cent range resulting from continued renewals, but it’s struggling to attract new tenants.

The west submarket has 12.2 per cent of the city’s office space and its highest vacancy rate at 19 per cent, up from 15.3 per cent a year earlier. That can be attributed to the continuation of the federal government vacating space.

The industrial vacancy rate fell to 3.3 per cent from 4.8 per cent in the previous quarter, while the average rental rate increased to $9.40 per square foot from $9.00. Minimal options have resulted in many tenants choosing to hold tight rather than looking for new space.

“The biggest challenge that the industrial market has is that there isn’t enough well-located and serviced land that’s zoned for industrial use,” said Holmes, who added much of the industrial stock is older and hampered by relatively low ceilings and inadequate loading capabilities.

“It’s a matter of identifying land within the urban boundary, with access to the Queensway and (Highway) 416, that can be rezoned to accommodate industrial use. Until then, you’re not going to see a lot of new industrial construction happening, which is unfortunate.”

The majority of tenant demand is coming from the 2,000- to 10,000-square-foot-occupier segment. Tenants in this range typically look for industrial space with existing improvements in an effort to reduce day one occupancy costs. Spaces without them are often bypassed.

The biggest activity is in the east submarket, which has 52 per cent of Ottawa’s industrial space. Some tenants are reducing their footprints, but the vacancy rate dropped to three per cent in the second quarter from 4.9 per cent in the first.

The central-west submarket, located within the Greenbelt and accessible to Highway 417, comprises 24 per cent of the city’s industrial space. Its vacancy rate was 2.1 per cent, down from 3.9 per cent in the previous quarter.

Kanata is focused mainly on the light manufacturing high-tech industry and accounts for 14 per cent of Ottawa’s industrial market. The vacancy rate rose to 5.4 from 5.1 per cent in the first quarter. Large tracts of warehouse space are available while small-scale showroom warehouse spaces are highly sought.

The vacancy rate in the south submarket, home to six per cent of Ottawa’s industrial space, slid to 4.6 from five per cent in the previous quarter.

The Orleans/deep east submarket caters mainly to the immediate community and has only 1.6 million square feet of industrial space.