Despite a recent rough patch due to federal government downsizing and a lack of private-sector growth, industry participants at the recent Ottawa Real Estate Forum expressed confidence in the overall state of the Ottawa office market.

It was generally a positive sentiment that came through in panel discussions involving those with stakes in both the downtown and suburban office markets at the event held last Thursday.

“The sky is not really falling; it’s just a broker’s greeting card to get in the door,” said Dan Gray, vice-president of leasing in Ottawa for Bentall Kennedy (Canada) LP, in reference to warnings from some in the brokerage community.

Second-quarter figures have put Ottawa’s office vacancy at between eight and 8.7 per cent, the highest in a decade. Some, such as James McNeil, managing principal at JJ McNeil Commercial Inc., have predicted double-digit vacancies are just around the corner.

Often noted is the federal government’s downsizing process and its Workplace 2.0 program that looks to reduce the amount of office space per worker. As well, there is  little to no growth in the private sector, particularly in the technology industry.

Gordon Wadley, a leasing manager for Dundee Realty Management Corp., speaking specifically about the tech-oriented, west-end suburb of Kanata, said: “Contrary to some blogs you’ve been reading and some reports that have been coming out, Kanata has been getting better.”

Wadley said the market for spaces of 6,000 square feet or smaller is particularly healthy. 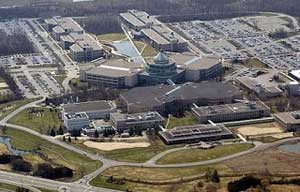 But downtown, where government operations are centred, has been the focus of  much concern. Besides reducing the size of the public service, the government is considering vacating many of its older buildings. Pierre-Marc Mongeau, assistant deputy minster for Public Works and Government Services Canada’s real property branch, told the forum the average age of its facilities is more than 40 years old.

“The portfolio that we are managing is not in top, top shape, and this is a challenge for us,” he said.

Mongeau added that Public Works is conducting a “rebalancing of our presence in the Ottawa downtown core and reviewing our own assets to identify candidates for disposal.”

As well, Department of National Defence is poised to move thousands of staff into the 2.35-million-square-foot former campus of Nortel Networks Corp. (shown in image) in Ottawa’s west end at an undetermined date, leaving holes elsewhere.

But participants in a discussion about the downtown office market were putting things into a longer-term perspective.

“It’s not really a scare, this vacancy,” said Brian Wallace, director of office leasing in Ottawa for Oxford Properties Group Inc. “We’re in a lull. It’s going to snap back.”

Lisa Lafave, senior real estate portfolio manager with the Healthcare of Ontario Pension Plan (HOOPE), said the relative stability of Ottawa’s office market makes it a blue-chip investment. “It should be in your portfolio,” she said.

Kelvin Holmes, managing director of Colliers International in Ottawa, said some of the people he heard at the forum seem to be “sticking their heads in the sand” and are ignoring troubling trends in both the public and private sectors, and what it means for Ottawa’s office market.

There was some back and forth on whether current trends favour either downtown or the suburbs.

Bernie Myers, vice-president of property management for Morguard Corp. in Eastern Canada, said there is a shift toward people wanting to work in more urban settings.

“You don’t have the campus out in the middle of nowhere anymore because nobody wants to work in the woods,” he said.

Conversely, there were some defenders of suburbs like Kanata as places where the “live, work, play” motto works just fine.

“The guys who run the companies in Kanata, they play on the golf course a lot of times,” said Brent Arseneau, leasing manager at Colonnade Management Inc. “They may live in the area in their nice home in Kanata Lakes. So they live, work and play in that area.

“So it doesn’t always lend itself to the mid-20s live, work, play model that we’ve all got stuck in our head. . . . It’s not that high, high-density, downtown market feel where I’m walking to this cool, trendy coffee shop as soon as I leave work. But not everybody is looking for that.”

Wadley acknowledged, however, that it’s hard attracting young people to work in suburbs like Kanata as they’re more likely living near the city centre and averse to long commutes.

“What’s always going to be a challenge for Kanata is attracting the 20-something workforce,” he said. “It’s expensive to get out there. You’ve got to pay for gas. It’s almost impossible to take a bus.”