The average office vacancy rate in Ottawa during the fourth quarter of 2013 increased to 10.7 per cent, up from 8.5 per cent during Q2 2013.  The Colliers International report comes on the heels of a Jan. 3 report that the Calgary office market vacancy rate also climbed to 9.1% in the final quarter of 2013. 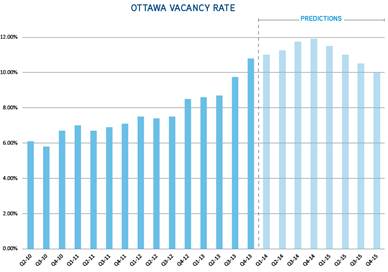 The departure and downsizing of government agencies and a shrinking pipeline of new tenants are blamed for the increase in vacancy rates, according to the Colliers report.

According to Colliers, the vacancy rate increase and subsequent decrease in rental rates across all markets have made landlords more aggressive in their pricing strategies to attract and retain tenants.

While the federal government makes up only 25 per cent of Ottawa’s workforce, government decisions have a major impact on the city as it currently occupies 60 per cent of the local office space, the report noted.

A couple of things are guiding the federal government’s decision to vacate space. Pressure on the B and C class markets are coming from the government’s move to leave any space that does not meet its current standards, which call for A class and LEED-certified.

The Colliers report also said that the introduction of Workplace 2.0, “a tactic being used by the government to eliminate deficit by 2015-16, will result in the government occupying a smaller percentage of space in comparison to its previous tenancy.”

Colliers predicted that in terms of the federal government’s approach to space, little would change with no federal election predicted before 2015.

Downtown, in Ottawa’s central business district, the average vacancy rate jumped from 6.7 per cent in Q4 2012 to its current vacancy rate of 11.1 per cent. The main cause for the jump is the introduction of the Morguard development at 150 Elgin, Colliers said.

Morguard added 358,214 sq. ft. of office space to the market, attracting tenants from other A class buildings in the central business district.

The only sub-market in the region to reverse the trend was the high-tech suburb of Kanata, which reported a vacancy rate slightly decreasing to 13.6 per cent during Q4 2013 compared to 15.6 in the same time period last year.

Kelvin Holmes, managing director with Colliers International in Ottawa, called the current market conditions unique and said they present both challenges and opportunities for landlords and tenants.

“The departure of government agencies, mainly from B and C class buildings, coupled with limited demand for A class space, is putting pressure on landlords who are scrambling to retain occupancy and lower rent rates,” Holmes said in a statement.

But for landlords losing tenants to other spaces, it could be a good time to modify their properties into mixed-use facilities in order to attract new tenants, Holmes suggested.

Cushman & Wakefield released a report in late 2013 that predicted vacancy rates would rise in many cities because of the large amounts of office space being built, despite softening demand. The latest statistics from Ottawa appear to be confirming that analysis.