When Robert Viner of the Ottawa real estate investment and development company Viner Assets set out to build student housing, he wanted to get it right. So he consulted with the best planners and developers’ representatives he could find and engaged the services of a top architect. 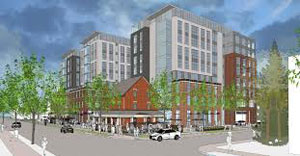 Despite all the preparation and hard work that has gone into the proposal for Viner Assets’ purpose-built student residence, citizens in the area expressed outrage and banded together to try to stop the development. Their efforts were obviously not in vain as Ottawa city council on Wednesday night voted against allowing the nine-storey building to proceed.

The battle that erupted over the Viner Asset project, and other related proposals, in Ottawa’s distinguished Sandy Hill area demonstrates attempts to develop off-campus, private housing can be fraught with difficulty.

“We spent a good year-and-a-half fashioning a design that we felt met all the bases,” Viner said prior to Wednesday night’s vote. “Did we think there would be opposition? Sure. But did we believe that we could produce a design that would transcend the typical objections? We did achieve that.”

Viner pointed out that his housing proposal received the support of the city planning department and that when it went before the planning committee a month earlier, nine out of the 10 councillors supported the zoning change.

Opposition to the project has come from a group that calls itself Action Sandy Hill, a volunteer-led community association. Action Sandy Hill did not immediately respond to Property Biz Canada‘s request for an interview.

In a letter sent to Ottawa’s Mayor and city councillors on March 20th, the group’s president, Christopher Collmorgen, wrote, “This large one-acre development would be completely out of scale with its neighbours and out of character with the area.”

The development proposals – at least two others are in the works – have caused neighbourhood associations to band together and call on the city to freeze any off-campus student housing until the city creates a student housing strategy, the Ottawa Citizen recently reported.

A housing shortage for students in Ottawa is sparking a mini-development boom in private student residences.  As part of the planning application Viner completed a study showing how its development would ease  the demand for student housing.

In a letter to the Ottawa Citizen, Action Sandy Hill wrote that the area is under pressure from the University of Ottawa’s growing student population and pointed out that post-secondary students from all institutions now make up 10 per cent of the city’s population.

Food and housing by private sector

Viner wonders why anyone believes an institution needs to provide housing. “Where did that assumption come from?” he said. Viner believes universities should provide higher education and research, while the private sector can provide things such as food and housing.

That’s where the Viner Assets development comes in. The proposed development was to have held 180 apartments. The ground floor would have contained 1,217 square metres of retail as well as amenities and office space for management. The development would have included “ample” bicycle parking and 63 spaces of underground parking.

The development was designed to replace four existing buildings on land Viner owns. The project, which Viner estimated would cost approximately $65 million, is a co-venture with CA Student Living, a Chicago-based real estate investment, development and management company.

Viner noted that CA Student Living has carried out similar projects on more than 20 campuses in the United States and has a strong track record supervising and managing students in buildings designed with plenty of amenities, and places to study, congregate and work out.

“We believe we’re bringing a life experience change that’s really on the edge by Canadian standards, but quite traditional in many (American) college towns,” Viner said.

According to a brief prepared by GBA Project Communications, the design by Barry J Hobin & Associates Architects – a well-regarded architectural practice known for its innovative work –  “is the result of an extensive process, including consultation with student housing industry experts and independent heritage consultants.”

In the brief, the development was described as a purpose-built student housing facility that would be safe and secure with 24-hour surveillance. The building would have included student life counselors, be professionally managed and fully furnished with fitness, study and social spaces and state-of-the-art wireless Internet.

The Viner development is not the only development proposed for the area. A Toronto-based company called 45 Mann LP wants to tear down a three-and-a-half storey building in order to erect a nine-storey building, the Ottawa Business Journal reported.

According to the paper, that building would contain 136 fully furnished apartments with one level of underground parking that could hold 52 vehicles and 133 bicycles.

Possibly in order to stave off criticism over the off-campus developments, the University of Ottawa announced its own project. The university intends to build a $17.5-million, four-storey student residence on campus.

The building will include 169 single rooms with a kitchen on each floor and a common space on the ground floor.

The university said the building is part of its Destination 2020 strategic plan meant to attract, host and keep the best students in the city. Marc Joyal, the university’s vice-president of resources, said in a statement residence living is one of the key elements the school wanted to offer its students.

“That’s why we’re investing the money and effort needed to increase the number of places so more students can live in residence,” Joyal said.