Is Ottawa becoming a vibrant business and government community?

Ottawa’s office vacancy rate fell to 10 per cent in the third quarter, dropping six points from three months earlier and reversing a trend of increased vacancy levels over the last year. 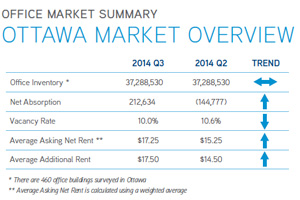 Healthy activity and demand for office space in Kanata was the driving factor behind the decrease and also helped push the city’s average asking rent rate up to $17.25 per square foot from $15.25 in the second quarter. The data was provided by Colliers International’s third-quarter Ottawa Office Market Report based on a survey of 460 office buildings.

Kanata’s vacancy rate dropped from 16.1 per cent to 11.8 per cent, largely spurred by large tenants in the high-tech sector that need manufacturing and office space.

“We’re not seeing the explosive growth that we saw before the high-tech market, but we’re seeing what I would say is more conservative and steady growth that’s more sustainable,” says Kelvin Holmes, managing director with Colliers in Ottawa, who expects lease rates to inch up in the suburb. “It’s not filling up buildings overnight, but it’s slowly eating away at the vacancy rate with a much more stable approach.”

Kanata’s vacancy rate remains the second-highest of the districts monitored in the report, and Ottawa’s overall office market continues to face some uncertainty. Much of that revolves around the federal government’s real estate strategy, particularly in the downtown core, with anticipated downsizing through layoffs and relocating employees from class-B and -C buildings there to higher quality spaces in suburban areas.

“A lot of landlords who own B- and C-class buildings and are at risk of losing federal government tenants will have to look at what they do with their buildings,” says Holmes. “Do they repurpose them? Do they tear them down and put up condo towers? Do they turn them into office buildings? Do they try and make a C-class building into a B-class building? Do they target the high-tech community and try and reposition the building to try and attract private-sector tenants?”

While Colliers forecasts that Ottawa’s overall vacancy rate will continue to drop over the next 24 months, the downtown core’s lack of a long-term strategy and planning to attract private sector tenants is expected to push its rate close to 12 per cent from its current 9.9 per cent. The vacancy rate was 9.5 per cent in the previous quarter, but the increase in availability of office space hasn’t had much of an impact on lease rates — which crept up to an average asking net rate of $21.50 per square foot from $20.50.

Class-A landlords are expected to compete hard for quality tenants from downtown Class-B and -C buildings who previously couldn’t afford such spaces but now can while taking advantage of market conditions that have seen an overall drop in asking rental rates and associated net effective rents in all classes of space over the last year.

As tenants take advantage of soft market conditions, the growing vacancy rate is the result of relocation. In some cases the movement of tenants to different classes of space downtown allowed for an increase in efficiencies, which resulted in tenants leasing less space. Forty-three per cent of Ottawa’s office space is located downtown.

“The A-class market downtown is dominated by large institutional players with deep pockets and large professional portfolios,” says Holmes. “So although there’s been a small increase in vacancy rates, no one is panicking.”

Private investors may be more skittish since they don’t have the capital reserves that may be needed to invest in their properties to reposition them, but Holmes says many of them have a long history in the market and are still on solid footing.

More positively for the downtown core, the three-year-old Ottawa Convention Centre is creating a higher demand for hotel rooms and hotel operators are looking at opportunities in the area. The Light Rail Transit system now under construction and expected to be completed in the core in 2017 will also bring benefits and the condominiums being built are expected to change the demographics of the city and fuel a trend of suburban-based companies considering a move to the core.

Some startup companies as well as more established software development, animation, gaming and entertainment-based tech companies are locating downtown and creating a younger population base.

“Those are the people who want to live in a condo downtown and walk to work and hit the ByWard Market afterward,” says Holmes. “The tech companies that are growing in Kanata are of the engineering, light manufacturing and assembly variety, where I’m guessing that the age group would be higher and be more family-oriented, where people want a backyard and not necessarily to live in a condo.”

Holmes foresees significant growth in the west end of downtown over the next five to 10 years. Developments just starting to come out of the ground, the National Capital Commission talking with the private sector about developing LeBreton Flats and Windmill Development Group and Dream Development working together on a plan to turn the former Domtar lands into a mixed-use community are among the biggest reasons why.

“The natural progression for the downtown core is moving west, which opens up exciting possibilities for the core,” says Holmes. “There’s a huge entertainment component in the west end of the core as well that could lead to the revitalization of Sparks Street. That’s quite an exciting feature, particularly with light rail coming into the core from the west.”

The fringe core submarket comprises 10 per cent of Ottawa office space and continues to have the lowest vacancy rate in the city at 5.3 per cent. It includes the ByWard Market and Glebe neighbourhoods and houses the majority of the city’s non-traditional office space, which attracts tenants seeking a comfortable work-life balance.

The federal government has always been a key player in eastern Ottawa due to its preference to be located close to a bilingual workforce, but some of the feds’ previously held space is now being vacated and may take a while to absorb.

“The east market has always been a much slower growth market,” says Holmes of the area that accounts for 9.5 per cent of the capital’s office space and has an 8.2 per cent vacancy rate. “We traditionally haven’t seen a lot of development in that area and I would expect that to continue.”

The south/airport submarket houses 9.8 per cent of Ottawa’s office space. Vacancies remained relatively unchanged at 8.3 per cent, resulting from continued lease renewals, but the area is struggling to attract new tenants. Demand for hotels within the area is high, however, which could result in demand for ancillary office services.

The western part of Ottawa is home to 12.4 per cent of the city’s office space and, although the vacancy rate remains high at 14.8 per cent, local amenities are helping create demand for space. The Westboro and Hintonburg neighbourhoods in particular are attracting companies looking for younger talent.

“It feels very much like Ottawa is on the cusp of going from a sleepy government town to a very vibrant business and government community,” concludes Holmes. “It’s quite exciting to watch it unfold.”