Oxford Properties never has any trouble finding capital to invest in real estate, thanks to the steady stream of cash flowing from its owner, the OMERS pension fund.

Its main challenge is finding investments that make sense. 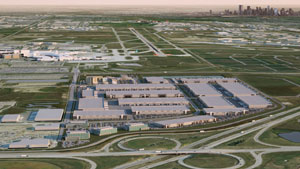 One of those, it has been decided, is industrial real estate. Having just grown its Canadian industrial portfolio to 10 million square feet, Oxford aims to double that total by 2018 through a buy-and-build strategy in just four big metropolitan markets.

No matter how the battle between brick and mortar retail and e-commerce ends, merchants are going to need a lot more logistics facilities. That’s where Oxford comes in. It sees industrial property benefiting from “favourable demand/supply dynamics particularly in its major cities.”

The company’s industrial wager is based on what are arguably Canada’s four strongest industrial markets: Vancouver, Calgary, Edmonton and the GTA, where it currently has the biggest footprint.

Land holdings Oxford currently has, which are heavily weighted in Western Canada, will support roughly one half of the planned 10 million sq. ft. of development. The rest of the expansion will come from acquisitions.

Already having that land on the books makes the expansion that much more certain. “Any Canadian market really has pretty high barriers to entry on land acquisition,” said Jeff Miller, vice-president of industrial at Oxford Properties in Toronto. “It is very difficult to buy that A-class, quality product. We have a real tough time sourcing and acquiring the type of buildings that we want to own.”

Why industrial? Why now?

Oxford is poised to quickly build up its industrial holdings as retailers are increasingly looking to beef up their logistical capabilities, said Miller.

“Regardless of whether consumers spending habits are through e-commerce or traditional retail, it has been a real benefit for the industrial business as companies have tried to shore up and set up their supply chains to deal with e-commerce,” said Miller. “E-commerce is not necessarily good for traditional retail but it has been a demand boost for the industrial warehouse side of the business.”

It is not all retail-driven logistics demand, however. Oxford forecasts demand coming from energy-related light assembly and storage in the Edmonton market, and some light industrial tenants in Calgary and the GTA.

“I wouldn’t say that manufacturing is booming, but it is encouraging to see some demand. We have had a couple leases signed for household furniture (manufacturing) or household products,” he said.

Oxford keeps a close eye on industrial absorption, competitors and demand in its four key markets and currently sees a tight market. “I would say that the Canadian development community still takes a cautious approach and does a good job matching supply with demand so we don’t end up oversupplying any one market at any one time.”

Of the approximately five million sq. ft. Oxford is looking to build, about 1.1 million will be in Vancouver, 1. 3 million in Edmonton and another 2.7 million in Calgary. The company is also looking to acquire a site in the GTA to build on.

Oxford does not just want to throw up new industrial buildings, but instead has a strategy based upon creating branded business parks and overseeing every aspect of their development. “By acquiring land, we can take a more master-plan, business-park approach and oversee the prop management, the development, put architectural controls in place and really create a bigger brand.”

“Flexibility is really key in any of these facilities,” said the industrial property vice-president. “As a long-term pension fund owner, we really spend a lot of time designing these buildings to be flexible . . . to accommodate different types of businesses, different size of businesses, and along with that, we make sure we are leading the market in terms of clear height.”

In Calgary, Oxford is in the second year of a five-year plan for developing and leasing Phase 1 of Oxford Airport Business Park, a four-million-sq.-ft. master-planned business park of class-A industrial buildings with future plans for office, retail and hotel space. It is located just 500 metres north of the entrance to Calgary International Airport. Phase 1, comprising four buildings totalling approximately one million square feet, is nearing completion and Oxford calls it “a first-class distribution hub into the city of Calgary and the west of Canada as a whole.” (Shown in picture above.)

In Vancouver, Oxford is ready to start work on a 1.1-million-sq. -ft. industrial business park on 64 acres in South Burnaby.  The site is located inside all of greater Vancouver’s bridges and rivers and is one of the closest industrial locations to serve Vancouver’s core population.

In Edmonton, where it currently owns the 1.8 million sq. ft. comprised of the Cityview and Northport business parks, Oxford plans to develop “several more facilities in 2014 into a supply constrained market which has witnessed increased demand due to the macroeconomic growth of the city and, in particular, demand from operators related to the energy sector.”

Oxford noted the northern Alberta city has “arguably the most compelling supply/demand dynamics across all Canadian industrial markets” given its 2.6% vacancy rate and 4.3 million sq. ft. of positive absorption in 2013.